Colonel Hakwe-Englishe Assassinated by our own reporter 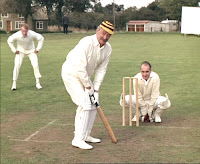 The Colonel was very hands-on when it came to getting on the trail of  mad scientist Professor Schnipps who has built a rocket to destroy . But of course he hadn't reckoned on Schnipps daughter. She, the girl who was death swaps cricket balls round at the boundary. This so that the next ball that is bowled at the Colonel, explodes on impact with his cricket bat, blowing the Colonel to bits one run short of his century. This much to the horror of the spectators.
There was blood and sinew were all over the wicket and crease, and the Colonel's head was caught out by the wicket keeper, who himself had bits of the Colonel all over him!
If only contact man Potter had been watching what was actually happening, and not keeping one eye on the girl, a beauty indeed with legs to match, but then so is the Praying Mantis and the Black Widow spider and they are as deadly as may be.
I spoke with some of the spectators who had to be treated for shock. They told me that they had never seen anything like it before, and wondered who would do such a dreadful thing? Who indeed?

One Thousand And One Nights!
I wonder how No.6 going to that nursery in ‘The Girl Who Was Death,’ and telling the three children his fairytale in the first place, actually came about. And was this in fact the first time, after all he did say he would come tomorrow as he didn't think he had any other important appointments. There could have been a series of fairytales, through which No.2 hoped to gain information from Number 6.
The name Scheherazade suddenly springs to mind. You know Scheherazade and the tales of 1001 nights. Or is that carrying things just a bit too far? Well in all probability, yes. But reading between the lines, and putting two and two together, I can see a possible parallel.

Yes, well, there aren't what I call 'infuriating moments' in the 17 episodes of the Prisoner, and even if there are, there is one for me that stands out by a mile, and it is this.
‘Do Not Forsake Me Oh My Darling’ sees No.6 return home to , although his mind is wrongly housed in the body of the Colonel. At the point when No.6 returns to the exact same office where he handed in his letter of resignation, but it is Danvers and not the bald-headed man as seen in the opening sequence, perhaps he was on leave or something. Anyway other men soon appear on the scene after has pressed the button underneath his desk.
One of these men is PR12, his code name, keen on code names is PR12. Because, and we are about to come upon that infuriating moment, when PR12 asks the intruder for his name. "Code or real?" the Colonel offers. "Code" PR12 replies. His bloody code name, I ask you, they're colleagues, or were, and here they are messing about with code names! Why not the man's real name, or was that down to copyright, unable to use the name John Drake? And the reason for sitting behind the desk? Well that's because the bald-headed man sat there in the opening sequence, scriptwriter George Markstein, had long left the production of the Prisoner, after becoming unhappy with the direction in which Patrick McGoohan was taking the Prisoner.