What's That Pat McGoohan Up To? 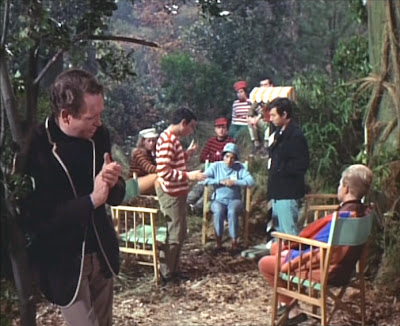 It looks like Pat's attending a meeting, and Angela Browne is there as well......yes, they are guests at the WPFC, that's the Widmerpool Prisoner Fan Club. Shall we listen in on the discussion that's taking place........................
"Everyone knows that the idea behind Number 1 and Number 6 being the alter ego of the other, is that Number 1 is who Number 6 was trying to beat. He is his own worst enemy."
"Yes, that is one explanation."
"It is the only explanation!"
"Why can there not be others? You are trying to force your will, your belief onto others."
"But everyone knows that's what Patrick McGoohan said, what he intended."
"Yes, but the situation of 'Fall Out' can be interpreted another way, that they faced Number 6 with his other self in order to break him. That other self being Curtis from 'The Schizoid Man."
"Curtis died!"
"We only have Number Six's word for that."
"So are you suggesting that Curtis is Number 1?"
"Perhaps Patrick would like to shed some light on the matter."
Patrick "No, not really."
"This is all very serious. I think we are all more than ready for a tea break, to be followed by an interview with Patrick McGoohan, to get his view's and ideas of what 'the Prisoner' is. And what he thinks of fan clubs dedicated to 'the Prisoner'......................."
Posted by David Stimpson at 08:27