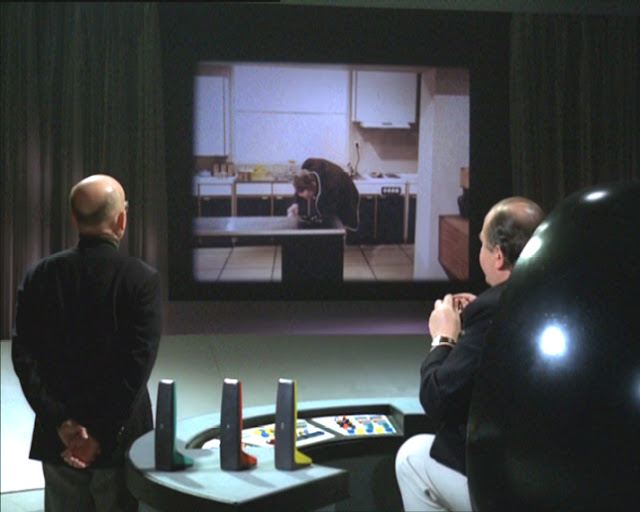 Supervisor "What are you watching?"
Number 2 "It's a new television series called the Prisoner."
"What's it about?"
"This chap resigns his job. He goes home, and is abducted by two Undertakers and wakes up in the Village."
"Really! What's his name?"
"Who?"
"The Prisoner."
"Yes."
"What's his name?"
"The Prisoner."
"Yes."
"He doesn't have one. But later he's known as Number Six."
"Why is he in the Village?"
"Because he resigned, and they want to know the reason why."
"What's he doing?"
"He's getting the milk out of the fridge. Last week he put a loudspeaker in the fridge!"
"Why did he do that?"
"Because he couldn't switch it off."
"Do they torture him?"
"Only up to a point. They're not allowed to damage him."
"Why?"
"They want him with a whole mind and body. They don't want him broken, a man of fragments."
"And the Village?"
"What about it?"
"What's the name of the place?"
"The Village."
"Yes, what's it called?"
"The Village."
"Yes."
"That's the name of the place, the Village!"
"Oh!"
"Haven't you got any work to do?"
"You obviously haven't!"
"Television broadens the mind."
"I prefer Coronation Street myself, or Crossroads."
"Or Doctor Who."
"Oh that's too scary for me. Daleks, Cybermen, Ice Warriors, it's the stuff of nightmares!"
"It could be said that the Village is a nightmare world."
"It is now they've gone and made a television series out of it. Who is he?"
"Patrick McGoohan."
"Oh, Danger Man's John Drake. Don't tell me it's him that's been abducted to the Village!"
"No, but that won't stop people like you from thinking it!"
"I'd better get back to the Control Room."
"Send in the Butler on your way out. I think I'd like some tea."

BCNU
Posted by David Stimpson at 09:25