A Change Of Mind 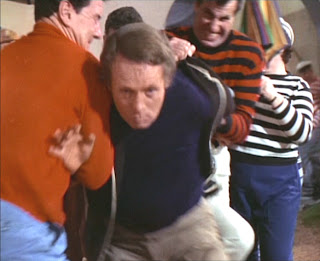 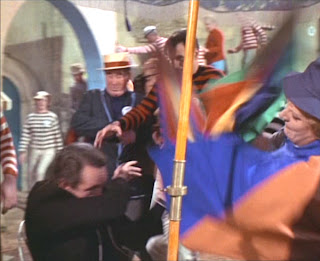 Subtlety seems to have been thrown out with the bath water in this episode, because this particular No.2 is happy to allow "mob rule" in the village, and not for the first or last time. To borrow No.6's own words "Good old fashioned brute force can be very effective" as the citizens having finally had enough of his unmutuality, turn upon him with force and violence!
Lashing out with their umbrellas, No.56 seems to take real pleasure from this, as No.6 is picked up, manhandled and dragged all the way to the hospital.
Throughout No.6's ordeal in the village, he's roughed up more often than not. And pictured here, No.6 has had to eat his own words as he takes a pounding. But don't forget, we mustn't damage the tissue...... oh they forgot!

No.6 was soon able to distinguish fact from fantasy in 'Living In Harmony.' But how long did it take No.6 to realise just who it was, he was telling his blessed fairytale to? Because he must have known all the time, having met previously with No.2 and No.10 to be able to put them in his fairytale in the first place.

That's what he tells No.2 of 'Dance of the Dead,' who warns him that if he insists on living a dream he may be taken for mad. "I like my dream" No.6 tells her. "Then you are mad" she tells him.
But what exactly is No.6's dream? On the evening of 'Dance of the Dead' No.6 is down on the beach looking for a sign from his world, a light, boat, a plane. No.6 pines for his world, but the village is his world, and the dream he is now living. So is No.6 mad, well not according the Psychiatrists records in 'Hammer Into Anvil.' But if the village is a dream, simply in one man's head, then he either is mad, or its a terrible case of self-persecution! Either that or one man's journey of self-discovery. And if the latter is the case, what exactly have we learned?

A Trail within An Ordeal!
And you thought Joseph K had it bad in Kafka's the Trial. But at least 'K' was only put on trial the once, not like No.6 who was put on trial within his already prolonged ordeal!

Be seeing you at the trial!