The Chimes Of Big Ben
Another change to the script comes when No.6 is sitting at a table atop of the cliffs over looking Nadia down on the beach, when No.2 comes to join No.6 at his table, and the conversation is as follows.

Prisoner: What do you want?
No.2: To ask you a question.
Prisoner: I resigned as a matter of conscience.
No.2:Oh, that! No, no, no! There are people who talk and people who don't. Which means that there are people who leave here and people who stay. You're obviously staying.
Prisoner: Has it ever occured to you, you're just as much a prisoner as I am?
No.2: But my dear chap of course! I know too much! If I wasn't in the village, they'd have to send me here! we're both lifers! that's why I'm so anxious we get along. You're doing very well, I must say. Beginning to make reality judgments.
Prisoner: What question?
No.2: What do you think of Nationalism?
Prisoner: Depends on whose side you're on.
No.2: Laughs.

{If this dialogue had been retained as it was, then No,.6 would have talked "I resigned as a matter on conscience" he said. If No,2 had had to accept that, then it would have meant end of episode, and the Prisoner would have been free to leave the village, having talked!}

I Don't Mind Your Face! 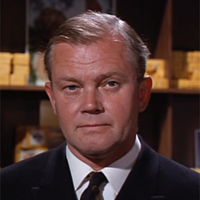 Whose Side Are You On?
Well at the end of ‘The Chimes of Big Ben,’ No.6 learned which side runs the village, his own side! Perhaps not by the same department for whom the Prisoner once worked, but a department who can have both the Colonel and Fortheringay seconded to the village in order to help out!
But this lesson learned appears to have been forgotten by the time the Prisoner manages to escape the village in Many Happy Returns, because just as soon as possible No.6 goes running back to his ex-colleagues, and into the hands of both the Colonel, and Thorpe.
And for a third time, when the Prisoner finds himself in trouble, his mind wrongly housed in the Colonels body in ‘Do Not Forsake Me Oh My Darling,’ he goes back for a third time to seek the help from old friends and colleagues. Will he never learn, that ex-colleagues are not ones to be trusted?
On another point, the Prisoner was said to have worked for Sir Charles Portland and that of his department. But apparently not so the Colonel, as when brought face to face with the Colonel, Sir Charles failed to recognise him!