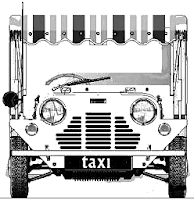 I suppose you think that the Village taxis were driven aimlessly around the Italianate Village of Portmeirion just for show. That all day taxi drivers drove round and round the central Piazza just for show. Well you would be wrong. Because when a taxi driver wasn't driving the Prisoner through the Village, or being stolen by No.6, to be followed and likewise by No.8, there was a real purpose for the taxis.
During the filming of the Prisoner in the September of 1966, guests were still staying at Portmeirion. Guests arriving and leaving, luggage picked up and dropped off. Rooms around the Village being serviced with fresh linen etc, etc, and such work is usually carried out using Portmeirion's own transport. Well if Portmeirion had used their own transport, it would have been a real give away. So what was decided was this, Portmeirion's porters would drive the taxis - Mini-Mokes - and that way guests arriving and leaving Portmeirion could do so safely and undercover via a Village taxi! That way if a taxi was ferrying a guest here or there through the Village while filming of the Prisoner was taking place, no-one would be any the wiser.

Perchance To Dream
There are those of the opinion that the events which take place within the Prisoner are nothing but a dream, or a daydream, played out in the mind of the character we know as Number Six. I don't think that the core of the series can be denoted as a dream, however, the conclusion, ‘Fall Out,’ could be. Certainly it's something of a nightmare for No.6, and anyone else for that matter, who is trying to come to terms with it!
Having said that, if episodes like ‘Dance of the Dead’ is a dream, that might account for the fact that the death sentence against No.6 was not carried out - you cannot die in your own dream! Dreams often conclude with a loop whereby events repeat endlessly often denying escape. The cyclical nature of the series reflects this with the door of the residence of Buckingham Place closing automatically towards the end of ‘Fall Out,’ Village-style, and the word Prisoner appearing on the screen confirming his lack of libery.
In ‘Dance of the Dead’ No.2 tells No.6 If you insist on living a dream, you may be taken for mad. To which No.6 replies I like my dream. To which No.2 replies Then you are mad! But which is the dream? the world beyond or that of the village, the village I suppose, because if the events of ‘the Prisoner’ are part of a dream, then it is this dream that No.6 is living in the village, a dream which he says he likes. Then he is mad!