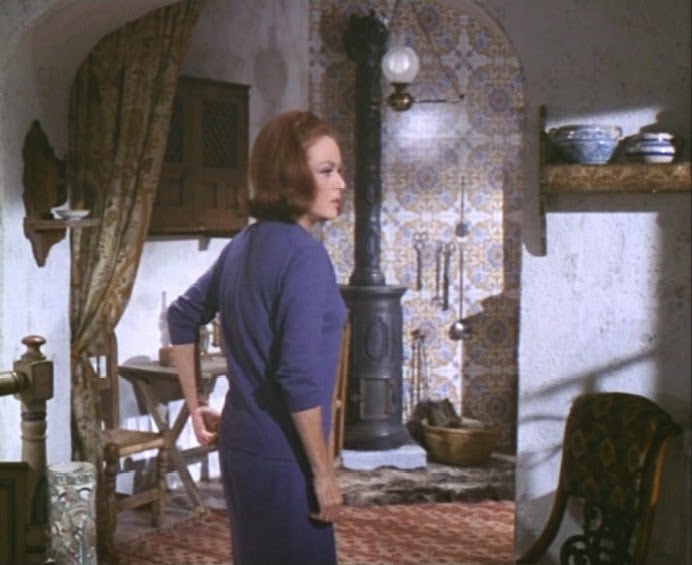 8 private is a small apartment, one could say bijou, Of course Nadia Rakovsky is a plant in The Village, so that when she wakes up and says “Thank God I’m home” we have to take it on face value that the apartment in which she wakes up, is in fact a replica of her own home. Something which Number 2 does confirm to Number 6 as they watch Nadia on the wall screen. But then we again only have Number 2’s word for that. In reality the apartment and its fixtures, fittings, furniture, and décor could have nothing to do with Nadia at all! However for arguments sake, we shall assume Nadia Rakovsy, if that be her name, has just woken up in her own home.
To my eye the apartment looks to be “countrified,” of rural origin, as suggested by the furniture made of chunky solid wood, the bed, the dresser, even the window shutters. The stove in the background suggests the country. There is only a small simple folding table in the background accompanied by three equally simple chairs. The two oil lamps suggest that there is no electricity laid on in the apartment. But there is a telephone line, and a continental-style telephone.
Pictures hanging on the walls are limited to two needlework “samplers” hung above the bed. Nadia’s home is functional, there are few ornaments. There is a ceramic chicken, which could be for holding freshly laid eggs, a statuette of a chap on a horse, a small horse, an elephant, and two matching candlesticks. On the table next to the telephone, a box, a pin tray with two matching ceramic pots. And either a mirror or picture frame, it’s difficult to tell which, as it faces away from the camera. Curiously there looks to be no personal possessions belonging to Nadia in the apartment.
There is one small anomaly connected to 8 Private however. Outside we see the regular sign post for the apartment, but it is accompanied by the number 8 in a white circle on the wall. Is this something to do with Portmeirion, or something put on the wall by the production crew, and if so why? 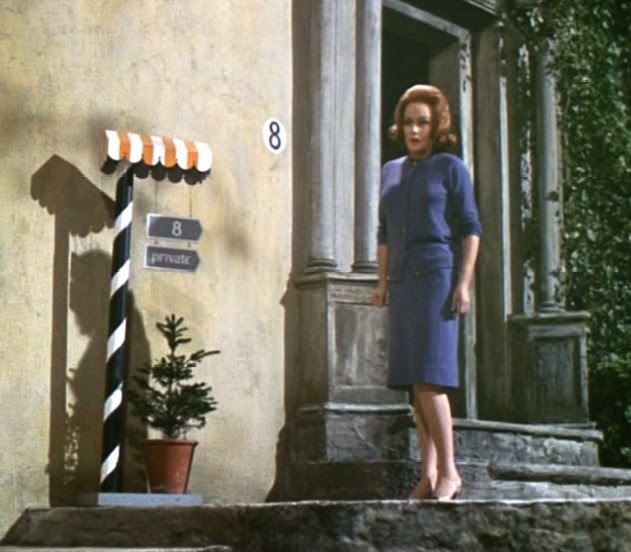