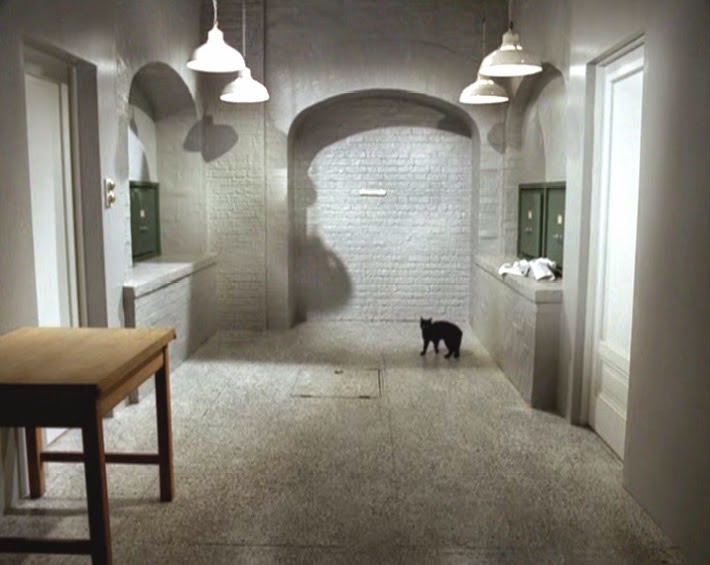 Takes place in the mortuary within the Town Hall during ‘Dance of the Dead. Number 6 discovers that the body {who I believe to have been Number 34} has been found {in all probability by the crew of M.S. Polotska} in a drawer in the mortuary. The wallet in the dead man’s trouser pocket to be amended, and the body itself to be amended. As Number 2 puts it, it’s a case of waste not want not. Well Number 6 makes the best of his opportunities he can’t blame Number 2 for doing likewise. We can understand how the wallet will be amended, but what about the body? Well two methods could be used, either plastic surgery, or the face could be so disfigured that the dead body would be only recognisable because of the wallet in the dead man’s pocket. But then there would be no mole, and the hair colouring would be wrong, but no doubt something could be done about that. And it was of course long before DNA fingerprinting. But then as Number 2 and Number 6 leave the mortuary to go back to the Ball, they close the door on the poor old cat, leaving it trapped in the mortuary!
What made Number 2 go looking for Number 6? Well no doubt he was missed by her at the Ball, and knowing what an inquisitive fellow Number 6 is…..he wouldn’t be able to resist poking his nose about the Town Hall. If the Ball had been held in the Recreation Hall, this opportunity could not have been afforded to Number 6. And curiously it was that the only door open to him, was the one which led him to the mortuary. All the other doors being locked against him. Number 6 adopted a disguise, borrowing the white coat of Number 116. I’ve sometimes wondered what a doctor’s white coat was doing hanging up in a hallway of the Town Hall. Perhaps he was late for the Ball, wearing his costume under his white coat, thus saving him having to change! And of course the spectacles which Number 6 found in the breast pocket of the white coat, they were McGoohan’s own, had to be. Otherwise Number 6 might not have been able to see his way about wearing them. Or else the lenses were plain glass, as they sometimes were when John Drake adopted a disguise wearing spectacles.
Hopefully the cat was not left trapped in that room for too long!

Be seeing you
Posted by David Stimpson at 09:47