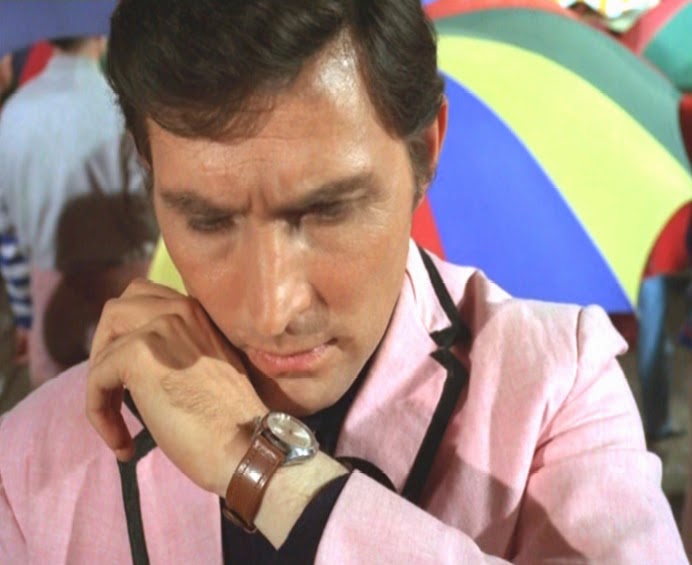 Here’s Number 100 speaking to the interim Number 2 by two-way radio hidden in his wristwatch. Perhaps those reading this will recall Dick Tracy, who wears a two-way radio communicator on his wrist.

So Mark Eden is simply mumbling into a wristwatch as he stands amongst the crowd, as Derren Nesbit mutters to himself standing on the balcony of the Gloriette. But fictionally speaking, Number 100 is talking to the heir presumptive Number 2 via the two-way radio secreted in his wristwatch, suggesting that Village micro electronics taken a sudden leap forward with the use of micro transistors. As in the case of the micro transistors in Number 8’s locket {Checkmate} found by Number 6. That would certainly help confirm that to be the case.

Dick Tracy
It was the comic strip character ‘Dick Tracy,’ a plain clothed, square-jawed, hard hitting, fast shooting, intelligent police detective created by Chester Gould making its introduction in 1931. One piece of equipment at Tracy’s disposal, the very first two-way wrist radio.
A man of very few words, Dick Tracy seeing the two-way wrist radio was an exception “It’s miraculous!” the square jawed detective raved. “It both sends and receives!”
The two-way wrist radio was a sensation, an immortal bit of prop technology. Since its introduction by Chester Gould in 1931, the two-way radio remained a technological holy grail at the time. Dozens of serious inventors have been intrigued by its possibilities. One of the most notable was Dr. Cledo Burnetti, an accomplished engineer for the Bureau of Standards, who devised a nifty working model in 1947.
It was reported in 2011 by Hewlett-Packard researchers that they expected to deliver to the U.S. Army a working prototype of what they called a "Dick Tracy wristwatch" — a lightweight, wearable device that soldiers in the field can use to view digital maps and other data on a flexible plastic screen that won't shatter or crack like glass.