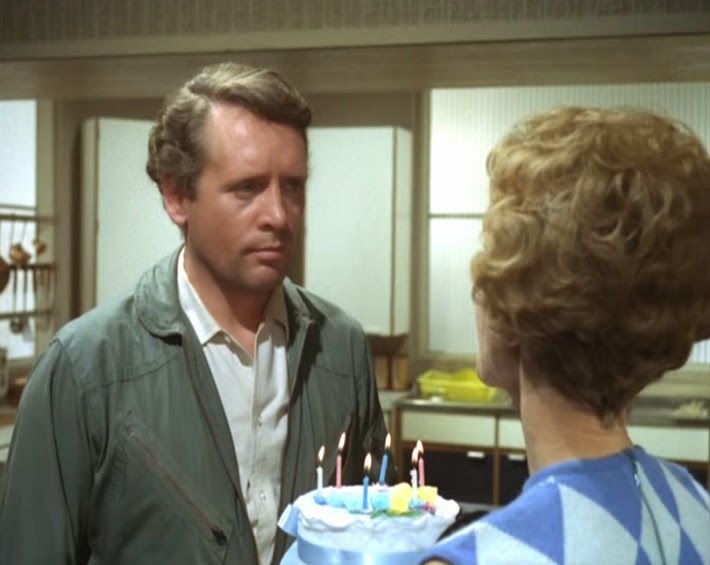 Today is the Prisoner’s birthday. It was only yesterday that he found himself back home in London. He took it very well when he found someone else, namely Mrs. Butterworth, living in his house, which still had 6 months lease to run. What’s more she was now the owner of the Lotus 7 which he built with his own hands.

But the Prisoner looked for reassurances, well who could blame him after the events of ‘The Chimes of Big Ben.’ This by looking out of the window, and listening to the dialling tone of the telephone. Also the patch of dry rot behind the bureau which was made good about twelve months ago, and the fact that the bathroom door slides open to the left. That the sink in on the right as you go in, and the hot and cold taps on the shower had been put on the wrong way round.
We the viewer have to take at face value, everything which takes place from the moment the Prisoner wakes up washed ashore on the beach at Beachy Head yesterday on the 18th, to the moment he took off in the Gloster Meteor jet aircraft. It all has to take place in one day, because when the Prisoner asked Mrs. Butterworth the date, she told him its Saturday March the eighteenth, to which the Prisoner responds “Tomorrows my birthday.”
Well many happy returns Number 6! It’s almost as though that having escaped The Village, he couldn’t wait to get back there! I like the way the Prisoner draws his knees up was he floats down to the ground on the end of that parachute. He’s either preparing himself for impact with the ground, or he’s attempting to prevent the inevitable for as long as possible!
Having divested himself of the parachute, Number 6 makes his way slowly back to his cottage. The wood and oil drums he left scattered on the quayside having been cleaned away. Arriving at his home, the coffee percolator begins to boil, the water shoots from the shower head, and Mrs. Butterworth, who turns out to be Number 2, arrives having carried out her promised which she made back in London, to bake him a cake. But the cake has nothing whatsoever to do with his birthday, seeing as the cake has but 6 candles. It’s more to celebrate Number 6’s many happy returns to The Village. The Prisoner walks over to a window and looks out, for reassurance?
What’s happened? Well the Prisoner has learned a lesson, that no matter where he goes, there is nothing easier than for them to bring him back to The Village. In fact that “they” had been in control all the time, pulling his strings! The Prisoner had eventually come full circle, ending up where he began. In a way, ‘Many Happy Returns’ is like The Village’s local taxi service, you can go anywhere you like, just as long as you end up back in The Village in the end! And for the Prisoner ‘Many Happy Returns’ is a new arrival. The episode is circular, like ‘the Prisoner’ series itself. We know the Prisoner escapes in ‘Fall Out,’ but we also know that eventually he’s going to end up back in The Village. In the Prisoner’s end is his beginning. And when the Prisoner looks out of that window and looks out upon The Village, there are the citizens parading around the Piazza. To the eye, it looks as though the Prisoner has returned to The Village just in time for Carnival!