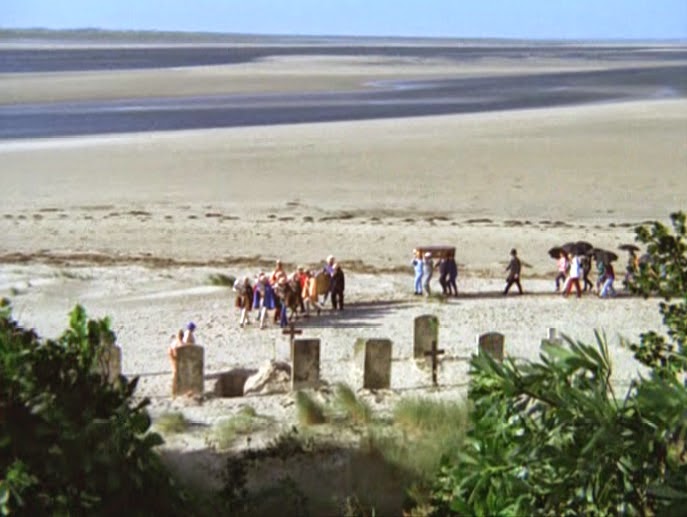 It has always appeared to me to be somewhat foolish, indeed ridiculous, to have The Village cemetery located on the beach, as we see in ‘Arrival.’ But now I see it is suggestive, suggestive that the terrain of the woodland surrounding The Village on three sides is not conducive to the digging of graves. Far easier to dig graves in the sand on the beach, rather than to clear bushes and dig amongst the roots of the trees.

It was during the evening of Thursday March 26th when I sat watching the BBC drama ‘Banished,’ a series about a fledgling penal colony in New South Wales. http://www.bbc.co.uk/programmes/p02jfvpn
As I watched the drama unfold in the forth episode, I was suddenly stuck with the thought, why the cemetery of the penal colony was located on the beach. The colony being surrounded on three sides by dense forest which stretches out for thousands of miles, making the digging of graves impossible without first clearing an area of land. So it’s easier, and less time consuming for the convicts to dig their own graves in the sand of the beach. And so my thought was to transfer this reasoning to that of The Village, also surrounded on three sides by dense woodland, thus making it easier to dig graves in the sand of the beach. It is just a pity that by the time of ‘Hammer Into Anvil’ the original idea of the cemetery being on the beach appears to have been forgotten.

Be seeing you
Posted by David Stimpson at 09:19