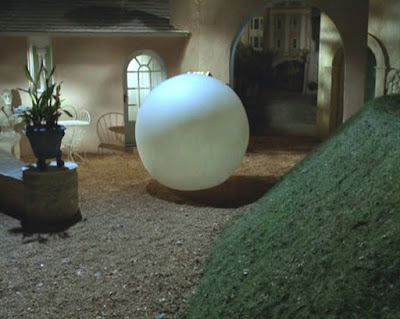 In the evening, back in his cottage of ’12 Private,’ all that had happened to Number 6 became clear when he looked deep into a dressing table mirror. But there was the question of his left-handedness. This was “righted” with the aid of a short-circuiting table lamp and a gas pipe to which he earthed himself. Now feeling much more his old self, he then set off into the night for his cottage of ‘6 Private.’ But the white membranic Guardian was on guard duty outside the cottage. 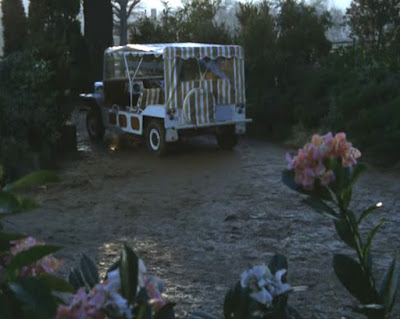 Not wanting to encounter the Guardian, Number 6 sees a Mini-Moke left parked and unattended close by. He dashes over to the taxi, and climbing aboard he starts the engine, releases the handbrake, engages first gear, releases the clutch, and depresses the accelerator, then quickly jumps out as the taxi moves off. The Guardian either sees this or senses the movement of the taxi, and sets off in pursuit of it. This is something of a symbolic moment, as setting the Guardian to chase a moving Mini-Moke, is rather like throwing a stick for a dog to chase!