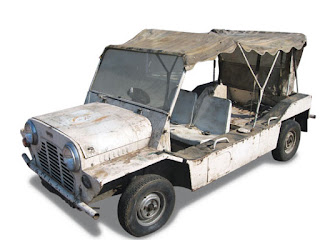 In 2011 Olivier and Christiaan Bos made the remarkable discovery of ‘the Prisoner’ Mini-Moke registration number HLT 709C {seen in ‘Living In Harmony’} in a barn on a farm in the Netherlands. The idea being the eventual full restoration of the vehicle to its former glory in Village livery.

However the Vehicle, having been in possession of Olivier and Christiaan Bos since then, have now up for auction at the end of August 2015 at ‘Classic Car Auctions.’

It is hoped that the Mini-Moke will be purchased by an enthusiast of ‘the Prisoner,’ and so eventually restore the vehicle to her former glory.