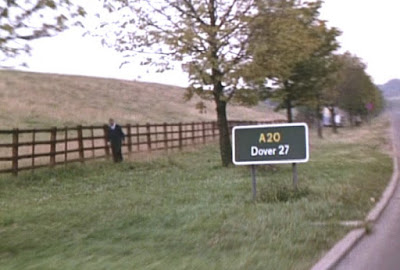 It was once interpreted that after ZM73 drives the Lotus Seven on the A20 with Potter in close pursuit, that the man seen in the picture mysteriously appears from behind the A20 road sign. The man doesn’t do anything of the kind. He’s just an innocent member of the public who probably doesn’t even know he’s been caught on camera during the location filming for a scene in ‘Do Not Forsake Me Oh My Darling.’
What the man is doing is stretching his legs whilst walking along the grass verge. Anyone who has driven on a long journey will know that from time to time a driver will stop for refreshment. If you look deeper into the picture, and to the right, there is a lay-by, and parked in that lay-by appears to be a mobile food stall. The man having had something to eat and a cup of tea, simply went for a walk to stretch his legs and possibly to find a secluded spot in order to relieve himself of said cup of tea before re-commencing his journey.