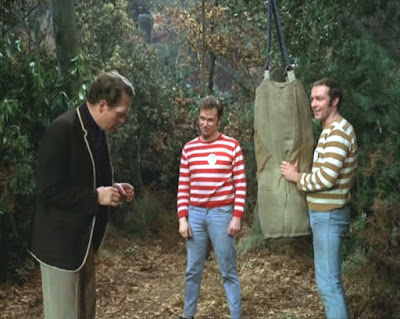 The second fight scene in ‘A Change of Mind,’ the when the two bully-boys return to reek their vengeance on Number 6 for his having previously beaten them up. The trouble is these two aren’t much good in a fist-fight, and Number 6 vanquishes them for a second time. At the beginning there isn’t so much fight in Number 6, but by the time the fist-fight is over, the two bully-boys lying unconscious on the woodland floor, Number 6 is back to his old self once more. I’ve often thought how these two men actually did Number 6 a favour. Because had it not been for their intervention, Number 6 would not have had a sudden release of aggression, of adrenaline, and so may not have regained his old self quite so soon.