A Right Pair Of Sixes! 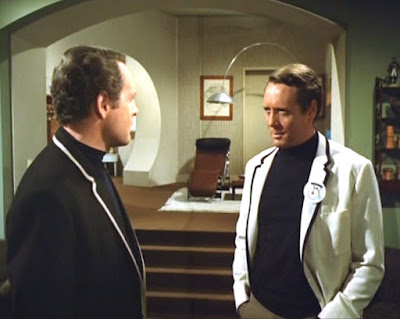 “So, what’s your game then?”
“Game?”
“What are you doing in my Cottage?”
“Your cottage, I like that!”
“I’m not interested in your opinion. What are you doing here?”
“Well this is my cottage!”
“How do you make that out?”
“Well this is Six Private isn’t it?”
“Yeeeesssssss.”
“Well I’m Number Six!”
“You’ve got a nerve I’ll give you that.”
“I’m not looking for compliments.”
“Good, then you won’t be disappointed. But I have to admit they’ve done a good job. I didn’t know I’d a freckle on the right side of my nose. Fall off did it?”
“Fall off?”
“Your numbered badge, fall off did it?”
“I don’t wear a numbered badge, because I don’t need one to tell me that I am Number Six.”
“Well at least they could have got the colour of your blazer right.”
“What do you mean?”
“It’s as plain as the freckle on my nose. Look, if you are supposed to be me, then you should be wearing a cream blazer. I’d have thought Number Two would have at least got that right!”
“You can talk!”
“What do you mean?”
“When Number Two briefed you he should have told you that Number 6 doesn’t wear a numbered badge!”
“I expect you threw yours away.”
“Something like that.”
“Well why don’t you toddle off and come back when you’re wearing the right coloured blazer.”
“Won’t that be confusing for those who are watching?”
“How do you mean?”
“Well if we’re both wearing the same coloured cream blazer. At least this way we all know whose who and what’s what.”
“Well they would even if we were wearing the same coloured blazer, after all it’s hardly rocket science.”
“How do you mean?”
“If we wore the same coloured blazer, we could be as we are now. My blazer is unbuttoned, and yours is buttoned up.”
“And if by chance we forget?”
“Then I’m the one wearing the badge!”
“I could pin a badge onto the lapel like you.”
“Ah but Number Six doesn’t wear a badge!”
“You said it!”
“Damn!”