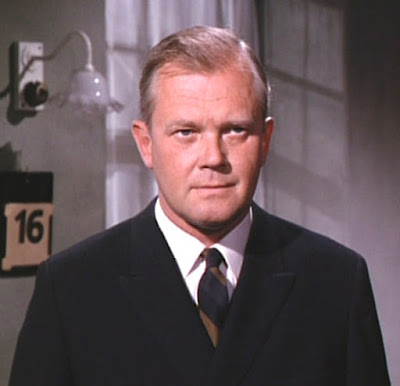 What might the significance be of that number 16 on the wall behind ZM73/THE Colonel’s shoulder? I once thought it might be the date of the week, but there’s no day, month, or year indication! However another explanation would be, that it’s a numbers board, each of the barber’s waiting customers takes a number to indicate when their turn is due. Although it might be wondered if the barber would get so many customers in his shop at the one time to need such a numbers system. Well it’s always possible, Kandersfeld is a large enough place to provide a large customer base.
What’s more ZM73 has changed his suit of clothes, from charcoal grey suit and black polo neck shirt. To a single breasted blazer, white shirt, and tie. I know ZM73 would have to have had a change of clothes, but perhaps it was a case of Nigel Stock being happier as himself, rather than as Patrick McGoohan!