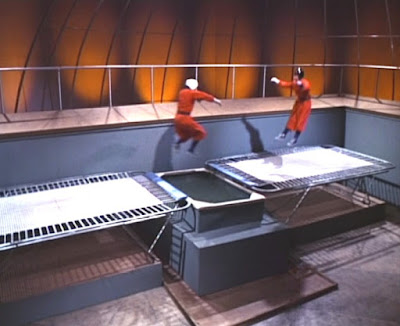 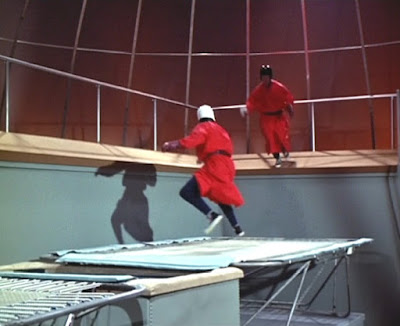 Kosho, is that one of the hazardous sports Number 6 talks about in one of his electoral speeches in ‘Free For All? It looks pretty hazardous, no wonder the two opponents are wearing crash helmets!
I did read somewhere that originally in ‘Hammer Into Anvil’ when Number 14 threw out the challenge of Kosho to Number 6, it was to have been Judo. However Kosho is visually more pleasing on the eye, and there is a good more action to it. 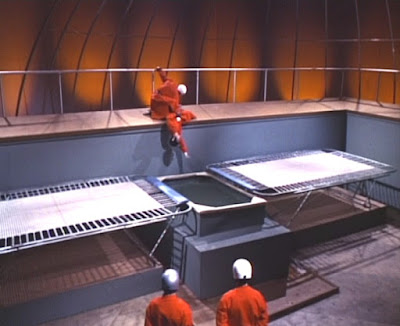 Number 6 had Number 14 at his mercy. When I first watched ‘Hammer Into Anvil’ way back in 1967, I was waiting for him to dunk 14 into the tank of water. But he didn’t. Instead when two other Kosho athletes appear Number 6 pulls 14 up. I have never understood why he did that. Unless the other two men are Guardians, but even so, Kosho is a sport, and to the victor the spoils, in this case the joy of giving Number 14 a right good dunking!
It’s inexplicable that the greater percentage of Kosho appears in ‘It’s Your Funeral’ rather than ‘Hammer Into Anvil.’ One could say that the filming of Kosho was for ‘It’s Your Funeral,’ that what is seen in ‘Hammer Into Anvil’ is stock film footage, or unused film from ‘It’s Your Funeral.’ And that could be right, except……except that in a number of close ups Basil Hoskins can be seen as Number 6’s opponent. Basil Hoskins wasn’t in ‘It’s Your Funeral,’ well except for during the Kosho sequence!