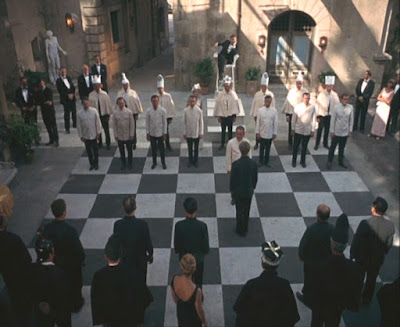 ‘The Man From U.N.C.L.E – One Spy Too Many’ {1966} film
“Megalomaniac Rip Thorn, wants to be like Alexander The Great. His plan is to commit the World's greatest crimes, in context to the Ten Commandments, in order to expand his industrial empire. Every crime is specifically designed to contradict the ten commandments. U.N.C.L.E. goes after him when he steals a secret chemical from the US military. Solo and Kuryakin team up with Alexander's former wife, Tracey, to stop him from becoming the most powerful man in the World. This movie is made from the "The Alexander The Greater Affair", parts one and two, from season two of The Man From U.N.C.L.E.”
http://www.imdb.com/title/tt0060783/plotsummary?ref_=tt_ov_pl

Interesting enough, like ‘the Prisoner’ episode ‘Checkmate’ ‘The Man From U.N.C.L.E – One Spy Too Many’{1966} has a human chess match. The Pawns of both sides are made up of the catering staff, while the Castles {Rooks}, Knights, Bishops, Queens, and Kings are made up from guests attending the party. Thorn throws out a challenge to anyone who wishes to play him, the challenge quickly accepted by Napoleon Solo. The chess match is not prearranged, there is no brainwashing involved, so therefore every person standing on the chessboard has to know how to play chess. The game resulting in a checkmate win for Solo. The film also contains an Alouette helicopter, and curiously enough a cake with the number 6 on it!