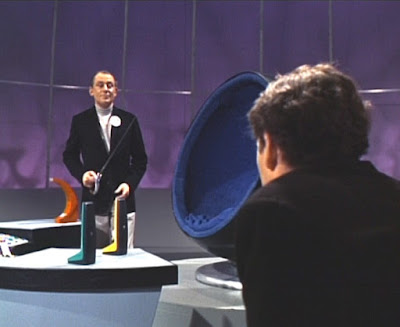 Number 2 is the odd 2 out! While other 2’s have an umbrella shooting stick, this Number 2 has a sword shooting stick! How, is unknown. Why? Probably not just to threaten Number 6 with, but because he is an unpopular Number 2, and feels he needs it for his self-preservation. Arthur Wellesley, the Duke of Wellington, felt much the same. As Prime Minister in Britain 22 January 1828 to 16 November 1830 and again from 17 November to 9 December 1834, he became a very unpopular Prime Minster, who was once besieged by an angry mob, and so carried about him an umbrella with a hidden dagger-tip!