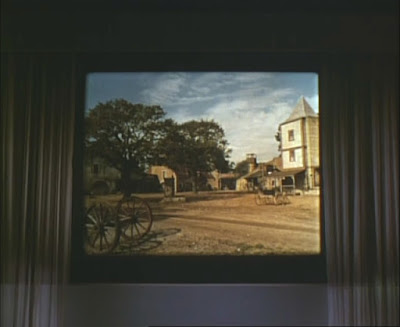 It has always seemed to me that the picture seen on the wall screen in Number 2's office in ‘Living In Harmony’ is nothing more than that, a painted picture. Why, when I should have thought that the screen should have shown a live feed from the Town of Harmony. After all that’s where Number 6 was, despite the other three, the Judge, the Kid, and Cathy, being in Number 2’s office. They would have had to see Number 6 so that they could interact with him via the wall screen. Because without seeing Number 6 on the wall screen, how would they know where he is in order to interact with him? And talking about interaction, would Number 2, 8, and 22 just see all the town’s people as well as Number 6 on the wall screen, or just Number 6? I suppose that would depend on whether or not they had been given the same hallucinatory drugs as Number6. If not, the only person they would see on the screen would be Number 6. And that could be riotous to watch, Number 6 running along and slapping his thigh as though riding a horse. And punching the Kid to the floor of the Silver Dollar Saloon, when the Kid wasn’t actually standing there. And again, the fist-fight with Zeke and the boys, and Number 6 fighting an imaginary fight all alone! Because the action we see as television viewers, isn’t the same action which Number 2, Number 8, and Number 22 witness on the wall screen. The only other person to see what we, the television viewer sees, is Number 6, because it’s inside his head, the effect of hallucinatory drugs!