Interim? Seeing as how there are interim Number 2's, it must follow that there is a permanent Number 2. Who then is the permanent Number Two? I had to ask myself how it was the first Number 2 had achieved the position of Number 2? And I have to admit I’d absolutely no idea! Presumably he, like his successor, had been appointed to the position by Number 1. After all there had been no elections, or Appreciation Day, which is an annual event. But why get rid of the first Number 2 so quickly, as it appeared that his term of office was a brief one. I find it difficult to imagine that he was the first incumbent in the Green Dome, and there merely to oversee the arrival of the Prisoner. He did manage to de-brief the Prisoner, and give him an aerial tour of The Village, and conduct an effective demonstration of The Village Guardian. Perhaps his sudden departure had more to do with the maid-Number 66 who failed to extract the reason behind the Prisoner’s resignation. But to be fair that was only a half-hearted attempt. On the other hand it was a very clever ploy to introduce a new Number 2, because it had the effect on Number 6 that he had to begin all over again with Number 2!

His predecessor was of a completely different character, an interim Number 2 who wouldn’t be in The Village long. Just long enough to explain about Cobb, and that what they do has to be done, its either them or us! His remit was not to attempt to extract any information from Number 6, simply to demonstrate that escape is not possible, and in this task he employed Number 9, who played on Number 6’s friendship with the supposed dead man Cobb for whom she seemed to be grieving. But Number 9 wasn’t much better off than Number 6, worse if anything, because she was but a pawn to be used in the game, and to be sacrificed if necessary.
Two further interim Number 2’s were appointed. The first appeared a clever and capable fellow. Yet his involvement with Number 6 was a peripheral one, almost convivial, who was there simply to oversee Number 6’s escape plan. He knew that they were using the wrong approach, but appeared to have had no say in the matter of ‘The Chimes of Big Ben!” The next Number 2 wasn’t quite as capable as his predecessor, his trouble was, he underestimated Number 6. But it may be supposed that he did his best, seeing the pressure he was being put under by Number 1!
Elections, here in The Village?! And was it that surprising that Number 6 could not resist standing for election against the current Number 2? And it’s perfectly true, everyone does vote for a dictator, because Number 6 won the election with a landslide majority. Everyone voted for 6 including Number 2.  So this new Number 2 had been taken to the Green Dome by the out-going Number 2 in order to hand over power. There were no instructions given by the out-going Number 2 as such, only saying that if Number 2 wanted to know anything he was to simply “Just press a button.” Is that how it was for every interim Number 2? No need to go into details, as no interim Number 2 would be incumbent in the Green Dome for that long a time!


On the face of it Number 6 did win the election, and yet Number 2 was a master of the manipulation of such a community as The Village. Indeed Number 2 did put the question to the electorate, had his opponent the administrative ability of the manipulation as such a community as ours? Obviously not. Because when Number 6 attempted to manipulate the good people of the community into a mass breakout, no-one took the least bit of notice of his words as they boomed out over The Village. “This is our chance…this is our chance, take it now. I have command. I will immobilise all electronic controls. Listen to me, you are free to go…you are free to go….free to go…free to go. I am in command obey me and be free…..” Number 6 as Number 2 was no better than any of his predecessors. In attempting to manipulate the people, he was attempting to force his will upon them. Yes everyone votes for a dictator! And yet because of Number 6’s sudden instability as the newly elected Number 2, the sudden rush of power having gone to his head, called for his almost instant replacement. A more severe, cold, unfeeling, and calculating Number 2 The Village had yet to see, as she warned Number 6 that they have many ways and means, but they do not wish to damage him permanently!


Even if the local election of ‘Free For All’ had been genuine, by the time of ‘Dance of the Dead,’ any form of democracy in The Village had been swept away! And a succession of interim Number 2’s followed, until the annual event of Appreciation Day, the day when the people of The Village showed their appreciation to their respective Number 2’s. That’s a curious phrase, “respective Number 2’s” meaning proper to each, and more than one. Is that the reason why Number 6 didn’t recognise Number 2 when he went to see him that time, to warn him of the assassination plot against him. If that Number 2 wasn’t his Number 2, who was the other one?! Unlike the local election, Appreciation Day is a genuine event, because it wasn’t concocted purely for the benefit of Number 6! His involvement with Appreciation Day was simply to give credence to the idea of the assassination plot against Number 2. He had nothing to do directly with the Appreciation Day ceremony itself. And with the appointment of a new Number 2 that would give a year’s term in office! In ‘Free For All’ we do witness for the first time, the handing over of power from one Number 2 to another, which took place privately in the foyer of the Green Dome. All the out-going Number 2 did was to remove the scarf about his shoulders and place it, along with the umbrella shooting stick, upon the table. There was no ceremony, no Great Seal of Office, because what took place was between two interim Number 2’s. 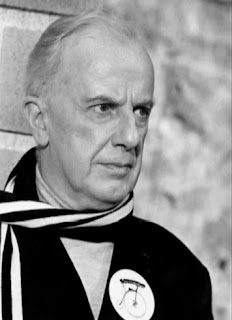 Appreciation Day is an annual event, the day when a new Number 2 is appointed. On this occasion a former interim Number 2. If the gentleman on the left is the retiring Number 2 who had recently returned to The Village after a bout of leave. If he is the former permanent Number 2, then the gentleman on the right, the new Number 2 is now the new permanent Number 2, having been appointed during the Appreciation Day ceremony.
It might be questioned why Number 2, who was about to retire return to The Village simply so that he could retire. But really there is no question about that, as he had to be there for the ceremony, in order for the handing over of power to his successor. It’s as simple as that. All part of Village procedure.


But if he was once the permanent Number 2, what had he been doing for the passed year? Clearly he had had no dealings with Number 6, but he had been working for the good of the community in having brought about the improved café facilities, the extra blue-zone in the post, and the new flower borders. Then there are the plans Number 2 laid down. The new Concert Hall that is to be built, the beautiful mural in the library, and the electrification of the clocks. Number 2 must have been working quietly behind the scenes, leaving a succession of interim Number 2s to deal with Number 6. What two Number 2’s in The Village at the same time? Number 2’s did work together during that episode of ‘Free For All.’ And later in ‘It’s Your Funeral’ there are distinctly two Number 2’s during that episode. The one being Chairman of The Village, while the other, an interim 2 was overseeing Plan Division Q! Otherwise Number  2, who having returned from leave, must have enjoyed more than the annual 2 weeks leave!