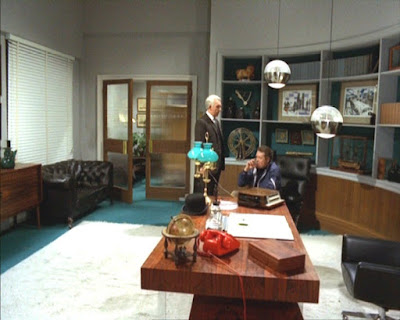 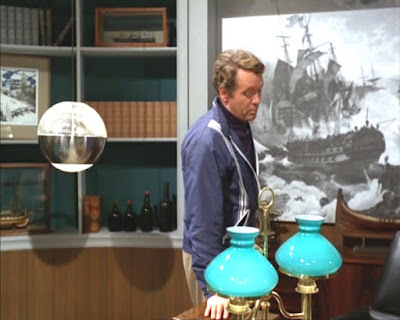 This is the office which Number 6 said he knows very well in London. It is a very busy office, by that I mean there’s a lot going on in it on a materialistic level. For a working office it’s very cluttered with ornamental things, what’s more the office has a very strong maritime look to it, for the office of man whose rank is Colonel. Such a decorated office would be more suited to that of an Admiral, as in Admiral Hobbs John Drake’s one time superior in ‘Danger Man.’
There is a small outer office which rather like the foyer of the Green Dome has paintings of sailing ships hung on the walls to the left of the pair of frosted glass doors. One could almost imagine the bureaucrat to whom ZM73 handed his resignation sitting in this office.  The Colonel’s office lies through a further pair of frosted glass doors.
There are two sets of shelves inset into the wall either side of a large black and white image of sea battle, in all probability Trafalgar. Set upon the shelves are a number of box files, books, coloured bottles, a bust, a pair of ceramic lions, and three ships mounted in glass boxes. There are a number of naval instruments, a pair of brass cannons, and a number of modern pictures and modern paintings adorn the office walls.
Two windows are covered by Venetian blinds, and under each window a pair of black leather couches. Between those, a brown furniture cabinet with a number of coloured glass bottles, and a drinks tray complete with ice bucket and soda siphon set upon it.
The writing desk is of modern 1960’s Danish design by Roxy Klassik of Denmark. In fact the desk might be said to be far too modern for the Colonel’s tastes. Upon the desk an ornate table lamp, an intercom, a miniature World globe, of the same design as seen in Number 6’s cottage. A red telephone, cigarette box, a trophy of some kind, a desk blotter, and roller blotter, a large glass ashtray, an inkstand with pen tray. Behind the desk is a black leather chair. There is also a black leather recliner, and suspended from the ceiling a pair of modern lights. The office complete with blue carpet and off-white rug.
The Colonel must have been extremely high ranking within the Civil Service, to have such a plush office. At that time there were strict guidelines within the Civil Service as to how an office should be furnished. For example, someone would have to be of managerial status before they were even allowed a rug for the floor!