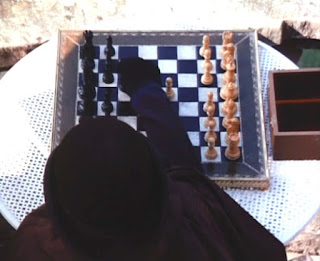 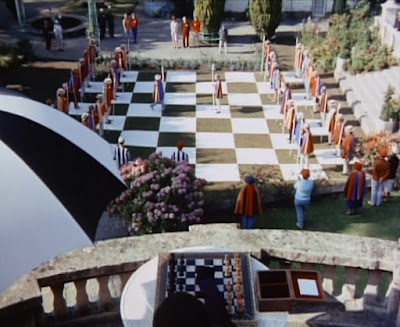 Some would have it that I control the human chess match by making the moves on my chessboard. That is something of a myth
seeing as I do not make my moves until the players have made theirs. I’m a keen student of chess, and I like to follow the moves on my on board.
You will have seen me no doubt on my way to the top of the stone Bandstand, I follow the chess matches from up there, looking down upon the board, so as to get a bird’s eye view so to speak. Well it’s the best advantage point for following the game. And for a while I’m important. Yes I carry the chessmen in their box, and yet an official of Administration carries both the chessboard and my striped umbrella in order to protect me from the sun. After the game I’m not quite so important, seeing as I’m forced to carry both chessboard and my umbrella. As for the chessmen, they have been put back in the box, and taken away by the official from Administration.
You can tell by my state of informal attire instead of formal attire, well that’s easily explained, it was my afternoon off!
At the end of the episode………… when I place the white Queen’s pawn back on the chessboard…… well symbolically that pawn is Number 6. I am not involved in the symbolism in any way, but why should Number 2 do something when he’s got someone else to do it for him, that’s the mark of a good administrator!