The Mini-Moke That Died of Shame! 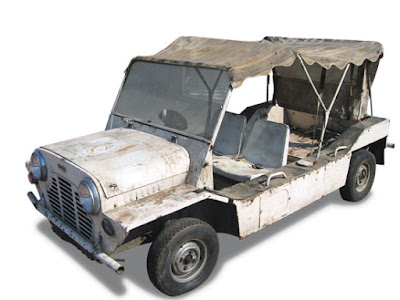 When I think of HLT709C I cannot help but be reminded of the 1955 film ‘The Boat That Died of Shame,’ starring George Baker, Richard Attenborough, and Bill Owen. The film revolves around the WWII exploits of British Royal Navy Motor Gun Boat 1087 and her crew, surviving anything the enemy can throw at them. At the end of the war, George Hoskins played by Richard Attenborough, convinces the Motor boat’s former Captain Bill Randall, played by George Baker, to buy their beloved boat in order to use her for some harmless, minor smuggling of black market goods, such as wine from France. However they find themselves transporting ever more sinister cargoes such as weapons, and counterfeit money. Although Motor Gun Boat 1087 has always been completely reliable, and never once let the crew down during the war, now frequently breaks down, as if 1087 is ashamed of her current use. Finally the crew rebel when they are used to transport a child murderer.
We do not know how Mini-Moke HLT 709C was taken from MGM studios after the completion of the production of ‘the Prisoner.’ Most probably she taken by a member of the series production crew. What happened to the Mini-Moke after that is a complete mystery, as all of the vehicles history has been lost. Save for the fact that HLT 709C appeared in ‘the Prisoner’ episode ‘Living In Harmony.’ However at some point HLT 709C was taken by someone, possibly being used as a run-about by a possible proud owner. Then later during her life the Mini-Moke was taken onto the European continent. What happened then, and why HLT 709C was not brought back to England is again unknown, or how many hands she subsequently passed through. However eventually the Mini-Moke found herself in the Netherlands, and somehow came into the ownership of a farmer, and put to work on a farm. It may be supposed that HLT709C was used as a farm truck, transporting bails of hay, animal food, possibly buckets of pig swill, such is menial work HLT 709C would have been reduced to, for a once proud Mini-Moke who found fame working on a television series. The work would be hard, working in the dirt day in day out, and in all weathers. Unloved, and uncared for, just as long as the Mini-Moke kept running the farmer only keeping the fuel tank full, the engine topped up with oil, the radiator with water. So with each passing day, the Mini-Moke losing more and more of her dignity and self esteem. And home? Home for HLT709C would be a barn, possibly an open Dutch barn, meaning the Mini-Moke might have been open to all weathers. Her paint work left unwashed and unpolished. The wood panelling rotting away, if not ripped out altogether, as well as the two back seats in order to make room for the transportation of hay bails, the buckets of pig swill, and bags of animal feed. At one point HTL 709C suffered a flat tyre, the spare was then fitted, and the original simply discarded as was the plastic cover for the spare wheel, never repaired and so never replaced. Her plastic candy coloured canopy, although growing more grimy and faded by the passing years afforded the interior of HLT 709C some little protection. But not so the matching seat covers, as these had become worn with age and use, and so removed and simply discarded without thought. And The Village canopied Penny Farthing insignia on her bonnet, growing more and more faded as the weeks turn into months, the months into years, and the years into decades. Until one day HLT709C finally gives up the ghost. Possibly her engine having seized up, the Mini-Moke was put at the back of the barn, left there forgotten and uncared for, and unappreciated until July 2011 when she was discovered in a dishevelled state, but largely intact by two brothers. Now that HLT 709C has been sold for well above its valuation, hopefully to a wealthy enthusiast of ‘the Prisoner,’ the Mini Moke can be finally go through a physical restoration period, restoring her to her once former glory. And emotionally returning pride to Mini-Moke HTL709C.