The Prisoner And Dead of Night – Revisited

I think that the majority of people reading this would agree that in ‘The Prisoner’s’ end is it’s beginning, such is the vicious circle in which Number 6 finds himself the unwitting victim. A car hurtles down an empty road. It is being driven by a man in his late thirties, his face is set in a grimace look of determination, either that or set against the wind! His journey takes him to the City of Westminster where he parks his Lotus 7 in an underground car park. Somewhere, we are not sure where, the man arrives in an office, or rather he bursts into an office, where a bald headed man sits behind a desk. His action of shouting at the man sitting behind the desk, is accompanied by a great deal of anger and clashes of thunder which culminates in the man slamming his letter of resignation down upon the desk, as well as his fist, almost as though to emphasis it, upsetting a cup and saucer upon a tea plate in the process.

Returning to his car in the underground car park, we see him drive through the streets of London, along the Mall and Park Lane, round the roundabout at Buckingham Palace, and Marble Arch to his home in Buckingham Place. Followed most of the journey by a black hearse, that very same hearse parked in Buckingham Place as the man driving the Lotus 7 arrives home. Two suitcases are already packed and waiting, he takes his passport and other travel documents, together with two colour photographs which he places in one of the two suitcases. But during this time one of the two undertakers has entered the house, nerve gas is pumped into the study, the skyscrapers outside begin to spin round and the man falls back onto the couch unconscious. When he finally awakens he finds that he is no longer in his London home, but in his "home from home" in The Village!
‘The Prisoner’ is a series of 17 individual episodes, which on the whole can viewed as a separate story in their own right. What I mean is, you can watch numerous episodes without having to watch the previous episode, only to be aware of the basic facts of ‘the Prisoner.’
The first episode is ‘Arrival,’ but is that the actual beginning of the series, as ‘Fall Out’ is the ending? Because with the ending of ‘Fall Out’ is the beginning of ‘Arrival’ and ‘the Prisoner’ as a whole. No sooner does Sir {as Number 6 became known} arrive home with his manservant the butler, then he jumps into his Lotus 7 and drives off. This while the Butler enters No.1 Buckingham Place, the front door opening and closing automatically and with a very familiar electronic hum. Sir drives his Lotus 7 through the busy streets of London, a single word PRISONER appears on the screen. Then a clap of thunder as dark clouds gather over a long and deserted road, or runway, as a car hurtles towards us. There is a close up of the drivers face set in a grimace filling the screen as it did in the opening moments of ‘Arrival’ and so ‘the Prisoner’ begins all over again!
PIC    Such is the case with Walter Craig in the 1945 film ‘Dead of Night,’ which is constructed around five independent short stories, horror stories, ghost stories and tales of terror, from ‘The Bus Conductor,’ ‘The Haunted Mirror,’ ‘Smee,’ ‘The Story of the Inexperienced Ghost,’ to ‘The Ventriloquist’s Dummy,’ but all to do with reoccurring nightmares.  And so to the beginning of ‘Dead of Night.’ A soft top sports car travels along a tree-lined country lane, its registration is unimportant but I give it anyway, EYY 260. As the car arrives at a bend in the lane it comes to a halt and the driver can see a house which has come into view. The car moves forward once again and in a matter of moments comes to a stop outside that very house which the driver had seen but a few moments earlier. There is a man, Eliot Foley, waiting outside the house to greet the driver of the car. Walter Craig, an architect and driver of the car, gets out and the two men meet. Foley takes Craig's suitcase and the two men walk towards the house along the garden path together. Craig has been invited down for the weekend by Elliot Foley and will be staying with a group of people whom he has never met before, in an area of the country where he has never been before. Oh and the house.... Craig has never been in it before, but he does know that the house has but one living room and unconsciously knows where to hang his coat!
There is a strange look about Walter Craig as he meets other guests who are staying for the weekend.
But after a moment or so he recognises a Doctor Van Stratton. Walter Craig tells the doctor that he has
dreamt of him continually. In fact it turns out that Walter Craig has had a recurring dream of the house he now finds himself in, and of all the people he now finds himself in the company of. In fact it turns out to be a nightmare! 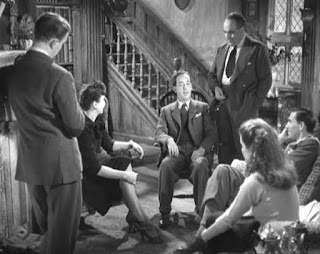 Walter Craig begins to explain his dream to his fellow guests. "The dream starts exactly the same as I arrived just now. I turn off the main road into the lane. At the bend in the lane the house comes into view and I stop as I recognise it, then I drive on again and Foley meets me at the front door and I recognise him too. Then when I am taking off my coat, I have the most extraordinary feeling. I nearly turn and run for it because I know that I am going to come face to face with the same six people." But Walter Craig has no proof that he has dreamed his recurring dream.
I shall not relate any detail of the four short stories as it would be rather time consuming, and would serve no possible purpose to the entity as a whole. All the four short stories are different and self contained, linked together only by the house guests. However at the end of the story The Ventriloquist’s Dummy, the dummy "Hugo" which has come to life, has its hands round Walter Craig's throat!
Walter Craig wakens from his nightmare just as his wife walks into the bedroom and the telephone rings. Craig's wife answers the telephone and passes the receiver to her husband, who talks on the telephone for just a short time and then replaces the receiver upon its cradle. Walter Craig then tells his wife that it was a Mister Eliot Foley and that he has been invited down to Pilgrims Farm for the weekend. Foley wants a reconstruction job doing, Craig being an Architect you will recall. For a moment Walter Craig wonders why the name Pilgrims Farm sounds so familiar, but then appears to think no more of it.
Then a soft top sports car, registration EYY 260, travels along a tree-lined country lane. At a bend in the lane the car comes to a halt and the driver can see a house which has come into view. The credits begin to roll and the car moves forward once again, finally coming to a stop outside the house. A man, Eliot Foley is waiting to greet the driver of the car. He takes Walter Craig's suitcase and the two men walk towards the house along the garden path together...... The parallel between ‘Dead of Night’ and that of ‘the Prisoner’ are unmistakable, each in itself a "living nightmare!"
And yet before ‘the Prisoner’ there was ‘Danger Man,’ and the episode ‘The ubiquitous Mr. Lovegrove,’ which begins with Drake crashing his car. In a later scene two men visit Drake asking for money to pay his gambling debts. Later as Big Ben strikes midnight Drake looks out of his bedroom window and down into the street to see the two same men, along with Lovegrove, returning Drake’s wrecked sports car back to him. Drake closes his eyes, reopens them. The two men, the car, and Lovegrove have gone. Then an undertaker knocks upon the door and looking up asks Drake whether he’s thought about his future lately, because even at the rosiest point there’s a nasty shock just around the corner! When I was watching ‘The Ubiquitous Mr. Lovegrove’ and that scene, it suddenly dawned on me how similar the scene is to that of a scene in ‘The Bus Conductor,’ one of the five ghost stories which go to make up the 1945 film ‘Dead of Night. Mr. Granger is a racing car driver, who suffers a terrible crash in a race and ends up in hospital. One night when lying in his hospital bed his travelling clock stops a quarter passed the hour of four. He gets out of bed and goes to the window, and drawing back the curtains he looks out, its broad daylight. 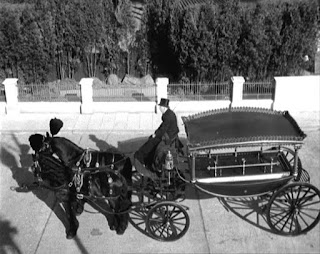 The birds are singing, the sun shining, suddenly there is absolute silence. Then below the window appears a hearse with an undertaker sat waiting. Granger looks down in horror……the undertaker suddenly looks up “Just room for one inside sir!” 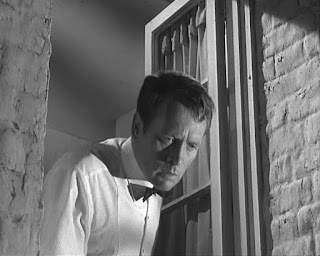 Not only was it the physical similarity between the two scenes which struck me, both Drake and Granger looking out of a window, the one to see his smashed up car, the other a hearse, the undertakers, it was an intense feeling, the sudden recognition of the two scenes. Perhaps the one being inspiration for the other!