The wreck of The Amis Reunis – Revisited! 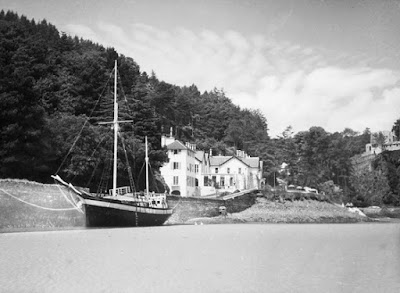 The 'Amis Reunis'  was originally an old Portmadoc trading Ketch of some 70 tons which Sir Clough Williams-Ellis had towed over and moored along side an old quay. And there she lay afloat in a fathom and a half of water for some years as a sort of yacht-houseboat, with electricity and water laid on.
Then the day came when the 'Amis Reunis' needed an underwater caulking and pitching, together with general maintenance. To get at her bottom meant selecting a good spring tide and stranding her on a sand bank, then laid on one side then the other. This was successfully done and the job finished, the 'Amis Reunis' was moored just off the hotel ready for her to be towed to a permanent berth and there securely made fast again. However before that could be successfully done, a sudden gale blew up and, with the spring tide, under her and her anchors dragging, she was carried out towards the island in the estuary. There stranded on the edge of a steep down-sloping shoal, so that when the tide ebbed, she lay over almost on her beam ends, her masts nearly horizontal and her keel in the air. This of course meant that there was every possibility that she would fall on the in-coming tide, and fall she did. It would clearly be a tricky full scale salvage job, or that failing, a total loss. Being particularly proud of his poor old ship the 'Amis Reunis' as Sir Clough Willaims-Ellis was he did all he could to save her. Somehow from somewhere Sir Clough collected a hundred empty barrels which were carried out and packed into her main hold to give her buoyancy, and an elaborate tackle to a winch on shore with which to pull her upright when she floated on the flood. But she never did float, and strain as they might at the winch and pulley tackles, they failed to get her up on an even keel.
A further plan with yet more barrels to help buoyancy, more man power on the tackles, and they were bound to shift her on the next spring tide. But before they came again, indeed within a week, the ebb and flow swirling about her hull had so dug her in, and so loaded her hold with sand. They tried digging her out yet there was no hope of shifting her. Day by day and tide by tide the sand further engulfed her; the more quickly because as she settled lower and lower the sands also piled up around her, and soon only her spars and upper works were visible.
At the time it so happened that Sir Clough was building a new quay to replace the shale bank below the hotel, and noticing that its curved end followed almost exactly the line of the ships bulwarks, he resolved to salvage what he could from the wreck and to construct her more or less as a ship-aground, partly from masonry, partly from the original bits and pieces.
Curiously it was whilst on holiday at Portmeirion in 1997, the tides being such that made it possible to walk right across to the island set in the middle of the estuary. Nearing the island I observed that there were old wooden beams just poking up out of the sand, I suggested at the time that this could be part if the wreck of the 'Amis Reunis.' Well what other wreck could be out there buried beneath the sand of the estuary? I tried to clear sand away with my hands to try and expose more of one of the timbers, and it was clear to my wife and myself that the timber had not simply floated in on one of the tides, but went deep into
the sand as though the timbers were part of a wreck, possibly that of the 'Amis Reunis'. Now years after I wish I had found a shovel and gone back out to clear away more of the sand from one of the timbers. Perhaps again, sometime in the near future, when the tides have shifted enough sand to reveal those timbers of what I believe to be of the wreck of the 'Amis Reunis' once again. 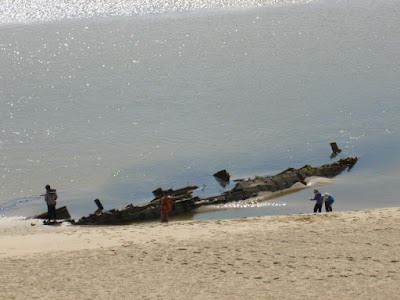 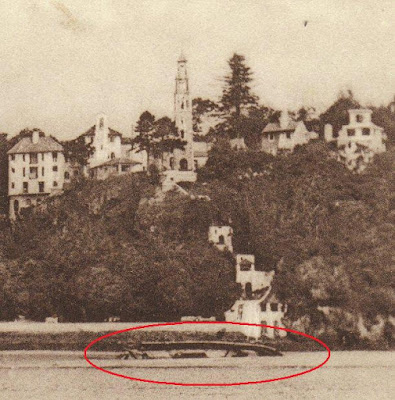 A closer view of the wreck of the Amis Reunis from the 1934 postcard - it looks to be in the same place, and lying at the same angle, as the mystery wreck found this month. {Thanks to Gareth Hughes and the Portmeiron Facebook.}
The Amis Reunis (1930) is neither quite a building nor yet a ship though a bit of both. Almost as soon as Portmeirion opened in 1926 Clough bought and converted a graceful old Porthmadog trading ketch of some seventy tons which he moored alongside the quay. This he used as a houseboat with water and electricity laid on. Part of the idea was that the sight of a considerable sea-going ship tied up to the wharf might suggest to seafarers that the little port was in business once again. During a sudden gale with a spring tide under her and anchors trailing she was carried out towards the island, Ynys Gifftan, and there stranded on a down-sloping shoal so that when the tide ebbed she lay on her beam ends, her masts nearly horizontal and her keel in the air. Having failed to save her, and being at that time engaged in building the new quay to replace the shale bank below the hotel, Clough noticed that the quay's end followed almost exactly the line of the ship's bulwarks and resolved to salve what he could from the wreck and to reconstruct her as a ship-aground. Sections of her stout mainmast act as pillars supporting the dining room's flat roof.
Those of you who are regular readers of my blog may be asking yourself, why has the previous article, which first appeared in the Summer issue 2012 of The Tally Ho, been reprinted? The reason is, that in May of this year I was given a DVD containing a number of “Huntley Film Archive” footage of Portmeirion. While watching one piece of film dated 1930’s, my attention was quickly taken by an object in the estuary only a matter of a few yards from Portmeirion’s

quayside. Remembering instantly the wreck uncovered in the sand at Portmeirion in May 2012, which at the time was thought to be either the Amis Reunis, or an old slate barge, whichever, it must be same wreck. 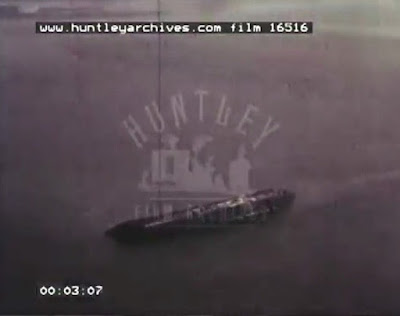 When I sat watching the piece of Huntley archive film footage of Portmeiron, and saw the wreck, I was gob-smacked, and instantly thought of the wreck in the sand of the estuary at Portmeiron, and of the Amis Reunis. I have no idea if Robin Llewellyn is aware of this piece of film footage or not. But it is interesting when viewed in conjunction with the wreck revealed in the sand in May 2012, and the speculation which followed. However it has since been confirmed that this wreck is the Amis Reunis. 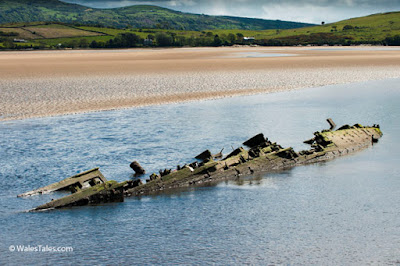 You can read about how the wreck of the Amis Reunis was revealed by the shifting sand of the estuary at Portmeirion at 'Wales Tales' by clicking in the link below.