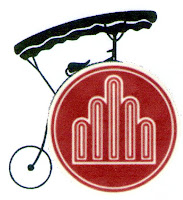 You know I said they wouldn't go for it. I also knew that one day someone would go and do it, and now he's been and gone and done it! "They won't go for it" I said, "the aficionado's of the original series. They might even see it as sacrilege but once the design department has got something inside their heads, well there's no stopping them. So I have no defence for the design on the left. However, no, perhaps that might be sacrilege as well. What do you mean that's never stopped me before!
In 'Dance of the Dead' No.240 tells No.6 that the Village has been going for a long time, since the war, before the war, which war? The design of the new Village emblem or logo is an Art Nouveau design, the Art Nouveau period spanning 1890-1910, so technically the Village could stem from as far back as the 1890's. No Mini-Moke taxis in those days of course, just hansom cabs affording the Village a local taxi service. Gentlemen wearing frock coats and top hats, a tradition which is carried on today, top hats worn by officials in Administration.
When building a basic Victorian wardrobe, consider a waistcoat, or vest as the first step. An authentic Victorian vest is the centrepiece of any outfit.  Much like modern ties, vests were used to make a fashion statement either bold or conservative and gentlemen would own several vests to accessorise the same dark suit. Victorian gentlemen wore a wide variety of vests in almost every combination of cut, colour and cloth imaginable.  With the opening of China during the 1840's silk become ubiquitous and relatively inexpensive, therefore men often wore extremely fancy silk vests even during the day. Many men even wore their coats buttoned only with the top button, thereby allowing more of their vest to be seen.
The ladies, in the early 1890's, wearing dresses consisted of a tight bodice with the skirt gathered at the waist and falling more naturally over the hips and undergarments than in previous years. The mid 1890s introduced leg o'mutton sleeves, which grew in size each year until they disappeared in about 1906. During the same period of the mid 1890s, skirts took on an A-line silhouette that was almost bell-like. The late 1890s returned to the tighter sleeves often with small puffs or ruffles capping the shoulder but fitted to the wrist. Skirts took on a trumpet shape, fitting more closely over the hip and flaring just above the knee. Corsets in the 1890s helped define the hourglass figure as immortalised by artist Charles Dana Gibson. In the very late 1890s, the corset elongated, giving the women a slight S-curve silhouette that would be popular well into the Edwardian era.
As the years progressed so to did the Village, and in 1888 the Hansom cab was finally made redundant in the Village by the import of an automobile from Germany produced by Karl Benz. And as motor vehicles developed and progressed so too the motor transport in the Village. In the 1940's there was the American Jeep which served as the Village Taxi right up until 1963 when the Mini Moke first appeared on the market.
There can be no doubt that the Village has been going for a very long time, and this has been but a brief insight into Village history.

I'll be seeing you
Posted by David Stimpson at 09:23