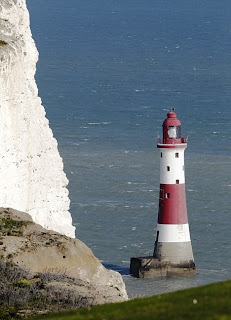 For British readers of my blog, you might be interested in a programme on BBC1 this evening at 6:20pm 'Country File'. Part of the programme is to do with the campaign to save Beach Head lighthouse's red and white stripes.
The lighthouse is in need of repainting at a cost of £45,000 every ten years, but Trinity House which is responsible for all the lighthouses around the coast of Great Britain, want to save costs by letting the lighthouse revert back to it's original granite grey colour. Up until 1951 the lighthouse was painted in black bands. Then given red bands in 1951 as to make it more prominent as a daymark for inshore shipping, and the white sections were left unpainted. It wasn't until 1980 that it was repainted to give it it's iconic red and white stripes.
If you miss the programme, or live outside Great Britain, then the programme will appear on BBC iplayer.
Footnote: The lighthouse at Beachy Head which appeared in the episode 'The Girl Who Was Death,' was actually manned by a lighthouse keeper at the time of 'the Prisoner.' So it is highly probable that the lighthouse keeper would have observed the filming of Patrick McGoohan as Number 6 down on the beach.
The lighthouse was de-manned and automated in 1983. It is monitored 24 hours a day from the Trinity House Operations & Planning Centre at Harwich in Essex.

I'll be seeing you
Posted by David Stimpson at 09:46