So, Michael worked for Summakor as an observer. He spent all his time watching people, writing reports on them, and passed those reports on to the floor above his in the Summakor building.................Michael discovered what Summakor was doing, what he was doing in fact. That all the people he had been watching, writing reports on, he was actually selecting the people to be sent to The Village!...........So what did Michael do? He resigned............and then woke up somewhere in the desert as you witnessed at the commencement of Arrival............But I wonder how Michael can enter a building in New York and still be in

The Village.........unless both places are one and the same! But it's a difficult thing, when The Village is all in the mind, in the mind of Two's wife that is. The mind is a powerful thing, and M2's mind seem to be capable of anything.
Homage continues to the original series in a couple of scenes, the church scene between Two and Six, and the times when the shopkeeper gets on the telephone to report the activity of Six, and later Two. But when the shopkeeper telephones the Clinic to report the man who is impersonating Two, whose voice does the shopkeeper hear? After all Two has just left his store..........probably a pre-recorded voice message made by Two before he left the clinic. The same way we see Two out and about The Village when Two is making his announcement about those who go about impersonating Two, that they are a danger to The Village!
So, if Six and Two times Six can be one, they can defeat Two...............and that could have been the case in the original series when I think about it. The two Six's become one, and gain ultimate power over The Village.................I wonder how many Two's there have been since 1968, more then I've had hot dinners I wouldn't wonder!
You know...................even though Two has deathly cold eyes, there are times when I look and see.........pain in Two's face. Pain? Yes, the pain he feels at having to keep his wife in an hallucinating, sedated state of mind, and all for the well being of the Village, and the community at large. Two must at times, suffer for that, even though he rarely shows his pain. No-one gets close to Two, unless Two wants them to!
When it became the case that Six had a double, I predisposed that his name would be Curtis, I was wrong.................And when it was said that Two had an alter ego, I thought there would be Two Two's, Two and an un-Two as Two called himself. And that's the point, there never was an un-Two, both Two's were one and the same, "One of number Two's little games," it would once be said. But then when we had two shopkeepers, I thought it was being taken too far. But no, they went one step further than one step too far.....the shopkeeper was existing in two places at the same time. In the Store in The Village, and as the "access man" in the basement of the Summakor building! Twins, doubles, I'll just have a large one! 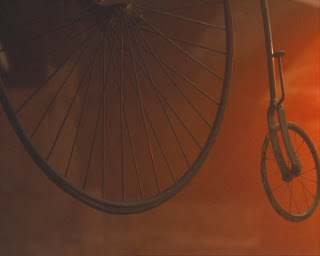 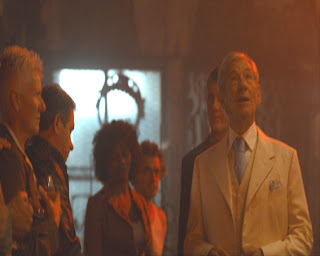 In the episode ‘Schizoid’ to goes to the “Go-Inside” Club in search of his son 11-12. On his way through the bar Two Pays homage to The Village past, as he looks up at a Penny Farthing bicycle suspended from the ceiling.