Schizoid is not simply about good and evil, there's the complicated natures in all of us, we've all got our problems, and some more than most, and just look at 313 some of us could profit from a spell in The Village, be better off in fact.
As for Six, not only is Six in a battle with The Village and Two, but also with himself. Part of Six's personality has been released, his anger, and should Six give into his anger, which is what Two wants Six to do, to try and kill him in fact, and if Six cannot control his desires Two will then control Six. Which incidentally is what No.2 was trying to do with No.6 in Once Upon A Time of the original series.
Schizoid is also about identity, about who we are. There is always a part of us that no-one truly knows, we hide it away in a box, anger, passion, jealously, whatever it is. But then just once in a while our other-self gets let out of the box, just like 313's abused self who she doesn’t want anyone to see, or go back to.
For Six his is the more thinking element, 2x6 is the passionate side to his nature. The sex drive, anger and rage, which is good to have because without our passionate nature what are were? And sometimes you have to get angry, to exert ones rage at something, someone. But sometimes it can also hurt yourself.
As for Two, he's undone by the guilt, the shamefulness of what he's done to his own wife, and that is shown in his Un-Two nature. The Village only exists in the subconscious mind of Two's wife Helen-M2. Curtis sacrificed his wife for what Two thinks is the greater good. But two loves his wife desperately, and desperately at times wants to communicate with her, which endangers everything he believes in - the Village. When Two yields to his other nature, becomes Un-Two, he is experiencing The Village at ground roots level.
Checkmate - What about 11-12, Two's son, what must be going through his mind when his mother M2 tells her son that he doesn’t exist. But of course he exists, yes he does, or does he? 11-12 thinks therefore he is, but only in his mother subconscious. For if 11-12's mother was to remain awake the 11-12 would simply cease to exist. It's no wonder that he was so keen to feed his mother another dose of pills! But just a moment......if 11-12 has been created in his mothers sub consciousness, is 11-12 then able to freely think for himself, or is 11-12's thought's his very actions controlled through the subconscious mind of his mother? If so 11-12 did not commit matricide at all. His mother was committing a Village suicide but through her son, because she could not subconsciously kill herself. So she did so by controlling the actions of her son 11-12, and thereby making good her escape from The Village, but at the cost of her son! 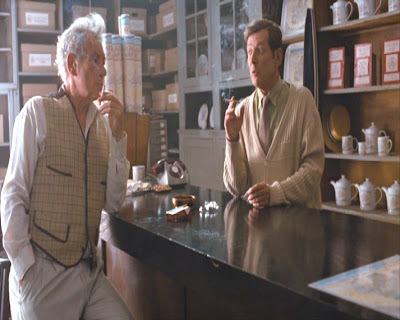 Here we see UnTwo enjoying an illicit cigarette with the Shopkeeper in the Village Shop, and judging by the expressions on their faces, they are really enjoying smoking those cigarettes. When UnTwo asked for a cigarette the Shopkeeper said that he didn't sell cigarettes, but the UnTwo knew that there was such a thing as "Under the counter" cigarettes. We don't see anyone in The Village smoking, no doubt it is no longer socially acceptable, which is the case in our society today. Oh and the brand of cigarette smoked by the UnTwo and the shopkeeper........Village cigarettes of course. The packet has The Village logo on it.

Once upon a time smoking was the acceptable thing in society, and in the 1960's and 50's nearly everyone smoked, but today smoking is frowned upon. Banned in pubs and clubs, cinemas, and all public areas, not to mention. Smokers are banned to designated smoking areas, not to mention the street! Perhaps one day smokers will go into the newsagents to buy "under the counter" cigarettes purchased in plain brown paper bags, as the case used to be when men would buy their pornographic magazines in plain brown paper bags, where today such magazines languish on the top shelf in newsagents, yet cigarettes should not be seen by non-smoking customers and children!
Both the UnTwo and the Shopkeeper know that cigarettes are illicit, but forbidden fruits, as we see them on the screen enjoying a cigarette, taste the sweetest.