what is it Six is afraid of? Whatever it is, every time he becomes afraid, or in fear of something Rover appears on the scene, as pictured here.
In the original series "Rover" as it was called, and became known as, was the Village Guardian which kept the citizens in line, and was despatched to recapture escaping prisoners. Stopping them by suffocating its victims into unconsciousness or worse. But in THEPRIS6NER Rover is not The Village Guardian. It is not activated at the command "Orange alert." It does not patrol The Village, nor does it keep the citizens of The Village in order, or chase down escaping Prisoners. You will have observed how it was armed guardians who chased the old man 93 out there in the desert, and not Rover, because in THEPRIS6NER Rover's role is very much different. Here is an enlargement of the above picture, because curiously the room in which Two was interrogating Six, who is cowering in a corner, seems to have it's roof missing. What's more that room seems to be under water! 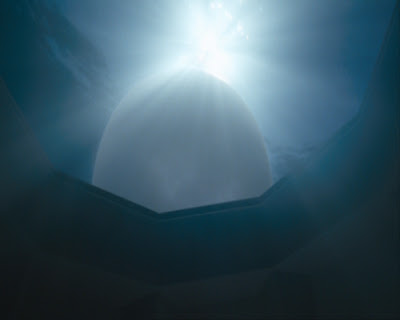 I'm only making this observation due to the way the sunlight seems to be filtered by water! There is no water anywhere near The Village. There was an ocean in the episode of Harmony, but that was like all the series, in the mind. Which is a pity really, because so is this image! But there can be no doubt that this is his own fear that Six cannot face!

1,100 who had the audacity to spy on two, this after Six had set his class the task of finding out who they work for what do they want? And what's their secret? But 1,100 was caught, having been caught spying on Two. The school girl is brought the presence of Two, and she is nervous because 1,100 knows what's coming next. A bout of treatment in the Therapy Zone!
See this kindly old gentleman, gives 1,100 an ice cream as a reward for her sterling work. But 1,100 wasn't quite clever enough, and made a mistake, and for that Two is about to have 1,100 sent to the Therapy Zone. The look on the face of this kindly old man, what could he possibly have in mind for 1,100? What’s more, in an earlier scene, when Six is rescuing 313 from the Therapy Zone, 1,100 is there long before she is taken there in the back of a van!

Somewhere out in the desert, at a long disused railroad halt, from the railhead, Six paces out six paces, and stoops to dig out an old tin he once buried as a boy of eight years of age. Inside a note read, "Whoever you are, I am Six." Now, as an adult Six paced this out exactly to where the tin was buried in the presence of 313. But on the television screen we see the boy Six is also pacing it out.
So on the beach, or out in the desert, if Six as a boy paced out where the tin was to be buried, the adult Six's paces would be longer, his stride would be considerably longer as a man than it was as a boy. That being the case, as Six paced out to where the tin was buried, he should have over stepped the buried tin by some distance! But Six went straight to it as 313 observed.   As No.2 once said "They are, damned clever!"