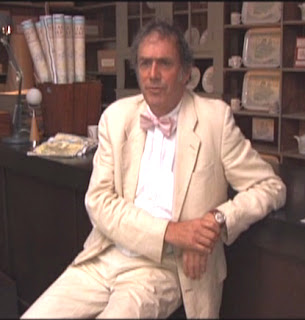 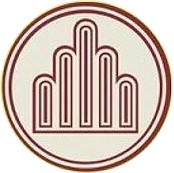 This is the Village logo, it is on everything from the map of the Village, to telephones, mugs and teacups. In buildings and on houses. The front of Village vehicles and the badges worn by the citizens. Production Designer Michael Pickwoad {pictured right} explained that when you saw the penny farthing in the first series you knew just where you are, it became the Village emblem, and when you see it you know precisely where you are.
Michael said he deliberately tried not to invent a symbol straight away other wise it would be wrong, he was waiting for the symbol to arrive. Austrian architect Joseph Olbrich {1867-1908} designed the Wedding Tower which was commissioned by the City of Dramstadt to mark the occasion of the wedding of Grand Duke Ernst Ludwig. The Wedding Tower Art Nouveau, Chrysler top to it, which was built in 1908. 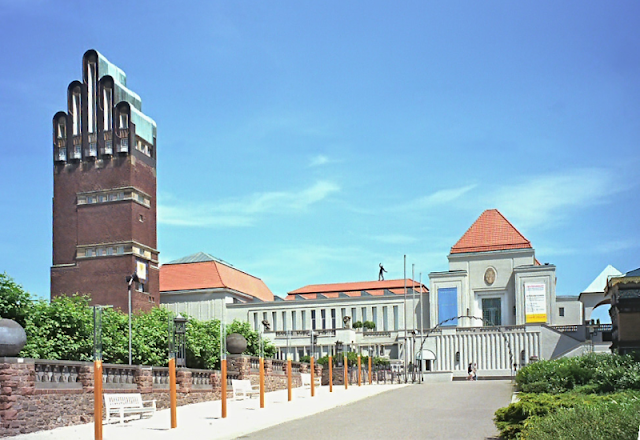 It's strange fingered top which when taken out of context meant everything and nothing was Michael Pickwoad's inspiration for the new Village emblem. He kept scribbling in his design sketchbook, until one day he thought no, this is the Village Logo.
So everything is Village, the cigarettes are all Village, the drinks are Village, everything is branded Village, nothing else exists at all. 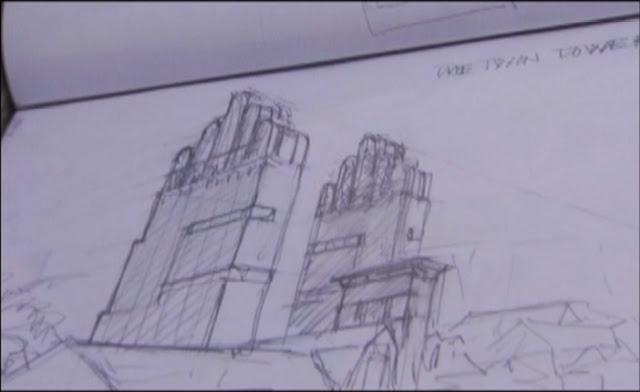 Originally the idea was to have the same Art Nouveau design for the tops of the twin Summakor towers, but this idea was obviously dropped for the series. 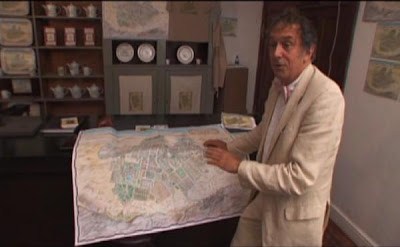 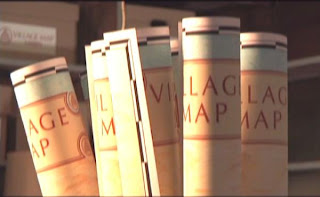 The map itself is loosely based on the street plan of the city of , in the , and was drawn by Michael Pickwoad over several weeks. Its a very childish map, which doesn't actually tell you anything, because in The Village you're not supposed to know anything!
As for the "old man - 93" according to Michael Pickwoad, he is a representation of the former No.6, and he should know from having worked on the series. But I was well convinced of that fact as soon as I saw him in the clips advertising the series, judging by his look, and dress, 93 couldn't have been anyone else. And its always nice to have ones ideas and theories confirmed by someone who knows.