The Village Shop – for All Your Needs 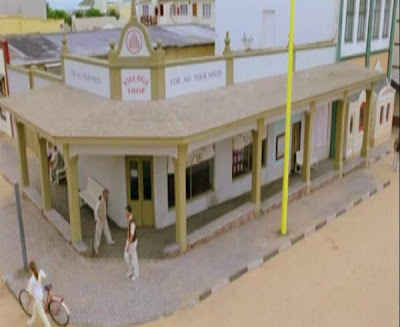 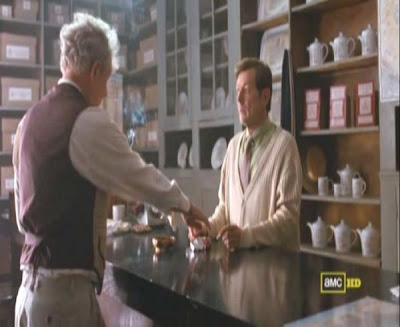 There isn't a sign of a potato anywhere. No refrigerator for the milk, butter and ice cream. No packets of aspirins, only an illicit packet of cigarettes! Oh there's a straw boater on the shelf, an echo of the past. If you have ever been to the Italianate Village of Portmeirion in , you will undoubtedly have gone into the Ship Shop. Well this Village shop has that kind of look about it, and no doubt if you could be there, has the same feel and atmosphere as the Ship Shop in Portmeirion, which the Village Shop has more in common with than the General Store of the original series of the Prisoner I have to say. What's more, the Shopkeeper seems only to happy to sell only Maps of The Village. Go inside his Emporium, and the first thing the shopkeeper asks you is "Would you like a map of The Village?" "No, I would like a pound of King Edward potatoes, a loaf of bread, a pound of butter, and a bag of sweets!"
By the way, that wasn't 20 Players No.6 that Two asked the Shopkeeper for was it?

Its strange to think that "what goes around, comes around," because according to an interview with Kenneth Griffith in 1986, Mcgoohan had said to him that he wanted to make a film about The Prisoner, on the life of Cardinal Menzenti in the Kalahari desert. And here, some 24 years later, and we have THEPRIS6NER having been filmed to the larger part, in the !
Recently I have not been comparing Merekats, but THEPRIS6NER, and here is another comparison between the two series. No.6 awakens on the sand after spending a night sleeping on the beach in the episode ‘Dance of the Dead.’
No.6, looking up at the sky sees a number of sea gulls flying overhead
Where in the episode of ‘Harmony’ as Six wakes up lying on the sand, somewhere in the desert.
But he also sees sea gulls flying in the blue sky overhead.
There's more in THEPRIS6NER than first meets the eye, such are the visualisations shared between the two series.

Six is a dying man - 313 examines Six and discovers that Six is dying. 147 takes Six to a man who might be able to cure him, a Village prophet tells Six that deliverance is coming, they just need to wait. I wonder what else that Village prophet might be able to tell us if we were able to ask!
In The Village "There is life, or no life" as Two puts it. So why does Six choose death, but then why is he afraid to die? Village Death is escape, if only Six could see it, if only he had the faith that Two had. But then Two had prior knowledge, otherwise he might have thought twice before he pulled that pin of the hand grenade.
Mister Curtis returned to his wife Helen in , he tells her "Don't look back." but how possible is that? For Curtis The Village had been his life, everything he believed in was in The Village. Could Curtis really walk away as easily as that and forget The Village forever? As for his wife Helen, she has lost a son. It doesn't matter that 11-12 never really existed, he did in Helen's mind, and that was enough for her. If you ask me Cutis and his wife, are two more broken people in who are in need of being made better, I wonder.................