It’s Carnival
The Town Crier has announced that Carnival is decreed for tonight, that there will be music, dancing, happiness all at the Carnival - by order. 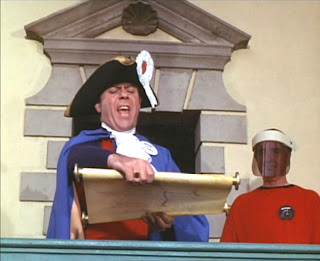 Music might be playing and happy laughter and cheering heard. But none of the citizens mouths are moving, a simple wave of their flags is the only acknowledgement the citizens give. And after that the Carvival parade is a regimented affair, with citizens marching in rank and file!
It maybe Carnival, but it here in the Village Carnival is simply another form of manipulation of the citizens of the village. Who later are turned into an angry mob, by the manipulation of the court, baying for the blood of the Prisoner!


Isn’t Things Made Easy For No.6?
Because really, shouldn't the Village morgue be at the Hospital, and not in the Town Hall? After all having the mortuary in the Town Hall was simpler, everything going on in the same building, and I suppose had the mortuary been in the Hospital it would have made it more difficult for No.6 to gain access.  However I suppose it was all a bit of a con, like most things in the Village, after all I sure that No.2 was perfectly aware that once inside the Town Hall, at the Ball that evening, No.6 would take full advantage. That he would be steered to the morgue, and make the discovery of the body lying in one of the long boxes. And in that, No.2 would discover No.6, and demonstrate that no matter how hard No.6 tries, it's going to become very uncomfortable for him!


Voice Over
It's not Christopher Benjamin's voice you hear speaking at the beginning of The Chimes of Big Ben, being No.2's assistant neither is it the voice over by Robert Rietty. So I don't know who it is, it's simply a curious observation that the voice of Christopher Benjamin wasn't used, even though he had lines as the Labour Exchange manager in ‘Arrival.’


A Curious Thing To Say
When No.12, or is it 6, joins No.2 for breakfast in the Green Dome in The Schizoid Man No.2 greets his visitor "My dear chap delighted to see you. You’re looking fine, you really are...... I don't mind telling you, we had to pull every string in order to seconded back to us." Why where’s he been?
"Back to us?" Now what could No.2 possibly mean by that?   You must remember that for all tense and purposes No.6 is supposed to be Curtis, and No.2 is supposed to be speaking to Curtis, so has Curtis been to the Village before the episode of ‘The Schizoid Man?’

I’ll be seeing you
Posted by David Stimpson at 08:20