I have to say that I found the whole experience of THEPRIS6NER intriguing. I'm not sure whether or not Six is in a dream or not, or whether or not he is in The Village dreaming about , or in dreaming about The Village. Two tells Six that there's no escape, because there's nothing to escape from, although Six sees it quite differently.
This may very well be a reinterpretation, a reinvention of the original series, but there are certain reassuring echoes from that original series. A modern day lava lamp seen in 93's apartment. The fact that the Prisoner, on his arrival in The Village, tries to take a taxi ride to the railroad station, or nearest Town. But of course 147 if only the local service, he does only local destinations. Oh and when the Prisoner goes to buy a map in the General Store, that shopkeeper just cracked me up........be seeing you, with a wave of the new Village salute, did you observe that?
And this is the new Village logo, it's on everything, just as it was with the canopied Penny Farthing bicycle in the original series. I suppose it will take some getting used to, if one has to get used to a thing. But yet, it has something about it don't you think? I believe J.P. has already made himself such a badge as this, such is his willingness to remain a prisoner!
There is a new Village, together with a new No.2 whom we are stuck with it has to be said. There's no opportunity for any other new Two. No opportunity for retirement, or vacations. To leave The Village, and be brought back. Two is a well dressed man, I particularly like his hat. and if you think Two wears no number, take a closer look at his tie, and you will discover a small "2". And that's something to be said about this series, it's subtlety. Two comes over as a kindly man, a man whom you can trust, go to when in times of trouble. But there's his sinister side, I mean just look at the way he eats that cherry cake! And he's clever this Two, the body of the old man, 93, may or may not have been discovered, buried out there somewhere in the desert. Because he holds a funeral for the "late" 93 who is deserving of a proper funeral. And in this Two hopes to silence any thoughts that 93 actually got away from The Village. But he did, didn't he, this 93. Because wherever The Village is, whatever time, death will always be an escape.
Of course we are used to having a new No.2 in The Village, but not so a new No.6. I suppose there had to be the first No.6, and using that train of thought Patrick McGoohan may not have been the first No.6 at all. But this is the first experience we have of a new No.6, or Six as he is called. Six is nothing like his predecessor, who I'm sure he encountered somewhere in the desert/mountains, the old man 93. 93 is too similar to how No.6 would have looked like as an old man, and there's that old style of piped blazer to account for. I didn't see anyone else in The Village wearing such a blazer, did you? The doctor-313 did wear a very subtle piped blazer, but whether or not Six will wear a piped blazer remains to be seen. So if the old man is supposed to be the former No.6, why 93? Well citizens in the original Village such as No.93 in ‘A Change of Mind’ had the number 254 in ‘The General.’ So it would be perfectly reasonable to assume No.6 might have been issued with a different number on the day he arrived back in The Village, after handing in his letter of resignation following Fall Out. And so when this new Village was created, 93, so the former No.6 was moved to it.
But I've digressed enough. Six, six is not like the former No.6. He's angry, defiant,
but he doesn't show it so physically or boisterously as his predecessor. But he's still not a number. He's a free man!.............I wonder why he woke up in the desert? And is he dreaming about The Village, or that of a previous life in ? We do have evidence of 93's former life, through that drawing of St. Stephen's tower which holds the bell known as Big Ben. Seeing as how No.6 was No.1 in the original series, and don't worry readers this is but a brief comparison, and was a member of The Village, and as this is a reinterpretation of ‘the Prisoner,’ what's the betting that Six will have been a member of The Village all the time? 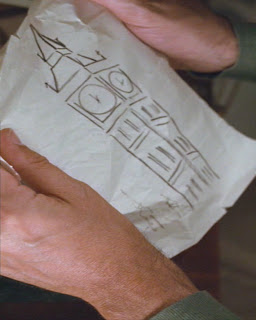 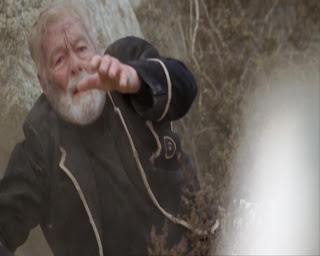