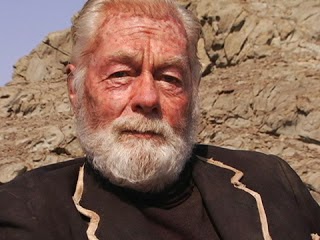 Reporter “They tell me you’re a bit of a dreamer.”
“If you mean I have memories of another place, then yes.”
Photographer “Smile” {click goes the camera}.

“Where is this other place?”
“London.”
“Not New York?”
“No, London.”
“Where’s that?”
93 hands the reporter a drawing.
“What’s this?”
“It’s St. Stephen’s Tower. It reminds me of the chimes of Big Ben.”
“Big Ben?”
“Yes, Big Ben, not Big Bill!”
“Ben and Bill?”
“No, Bill and Ben the flower pot men!”
“You’re not the former Number Six are you?”
“What makes you ask that?”
“Perhaps it’s the old style of blazer you’re wearing.”
“I’m Ninety-three, always have been.”
“You mean the chap who confessed to his being disharmonious and inadequate?”
“Who?”
“Ninety-three. You could be him you know, perhaps it’s the beard.”
“Ninety-three, do you know what nine and three make?”
“No.”
“They make twelve!”
“Really!”
“Its all to do with Numerology you see. Nine and three is twelve, and half of twelve is six!”
“What does that add up to?”
“That I belong to old Village!”
“Well your blazer is rather old school!”
“Old Village I would have said!”
“But this is new Village!”
“Yes, I’ve been wondering what I’m doing here. If it’s not one Village it’s another!”

Village is best for us.
Be seeing you
Posted by David Stimpson at 09:37