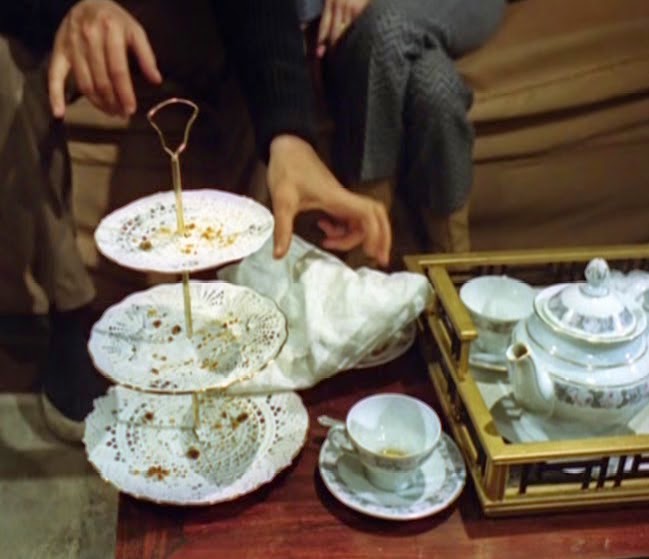 In ‘Many Happy Returns’ the Prisoner appears to have a ferocious appetite for Martha’s dainty sandwiches, and Mrs Butterworth’s fruit cake. It has been remarked upon, by a number of fans of the series, that no one could possibly eat such a quantity of food. A plateful of sandwiches and quantity of fruitcake on the cake stand. Well I argue the point that anyone can eat so much, after having eaten so little over the past 25 days. But the fact remains Number 6 did! Such being his hunger and appetite.
And yet if one studies Martha’s dainty sandwiches, and the clue is in the word “dainty.” The crusts have been cut off to such an extent, that all is left are but small triangles of white bread. What’s more the filling doesn’t appear to be up to much either. Paste spread, a little sliced ham perhaps. Exactly how much fruit cake was on that three tier cake stand is unknown, because we do not see. So it is anyone guess. However it is unlikely to have been filled with large portions of fruitcake, more likely thin slices of slab cake!

BCNU
Posted by David Stimpson at 08:43