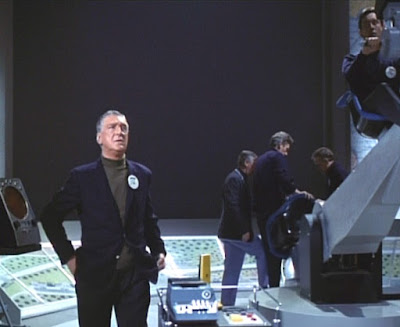 Takes place in ‘Checkmate,’ when Number 6 is transmitting his mayday call from a changing tent on the beach. The mayday is picked up by the crew of M.S. Polotska, with the Control Room in The Village monitoring the mayday. The Supervisor is listening, and then makes his report to Number 2. The Supervisor doesn’t recognise the voice of the person making the mayday call, I wonder why? After all I recognised it immediately for the voice of Number 6.
It’s a nice scene because we also witness a changeover of an Observer sitting on one end of that steel see-saw. Also for the first time we see the Supervisor-Number 56 operating with an assistant, Number 249, as they try to get a fix on the automatic distress signal being transmitted. The signal is very close, in fact a lot closer than they think.
249 “Nothing.”
Supervisor “that’s twelve miles, try six.”
“That’s six. Not much hope of finding them unless the aircraft is still floating.”
“Couldn’t you get a signal off a dinghy?”
“Ooh doubtful.”
“There could be more than one, they didn’t say how many passengers they’d got aboard.”
“Only one distress signal.”
“Might be saving their batteries. Search in closer.”
“We’ll start getting readings from the high buildings in The Village.”
“What’s that?”
“The mountains to the north of us.”
“Better see if the radio station on the tower can give us a cross bearing. This is control calling the tower, control to the tower are you receiving me…over?”
I don’t know about any radio station in the Bell Tower, but there is a searchlight crew on top of the tower. Perhaps the radio station is in a room below them.