The Map of The Village 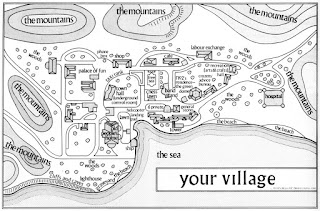 The Map of Your Village. It doesn’t really tell you anything. Oh it tells you where you are well enough, that there are mountains, but which mountains? The Sea, but what sea might that be? Nor does this map largely correspond to The Village itself, only in some aspects. The Palace of Fun is marked on the map, but it’s never referred to in the actual series. I suppose by the time they came to begin filming the series someone had come up with the idea of the Recreation Hall. That wouldn’t be on the map, as it’s not physically in The Village. Is that why, when Number 6 encounters the two Guardians one evening in ‘The Schizoid Man’ they ask him for the password, he tells them “The atmosphere here is very different to what it was elsewhere.” Possibly because in the scene in question they are on a film set at MGM Studios, rather than on location in Portmeirion. In other words a mock-up of The Village against the real thing. Perhaps the line is an in-joke on the part of Patrick McGoohan.

When I first went to Portmeirion, I was struck by how small the place really is. I’ve watched the Prisoner stride out across the lawn on his way to the café. He takes 17 paces to cover the lawn from the Gothic Pavilion to the steps of the Piazza, what’s more the lawn is made to look so large. I’m sure that when I strode out across that very same lawn I covered it in fewer paces than the Prisoner! I’ve stood on the balcony of the Goriette and fixed in my mind’s eye the crowd parading about the pool and fountain of the Piazza, the music of Elms march in my head. And in that confined space considered what the devastation would have been during the Appreciation Day ceremony, plastic explosive being detonated. It wouldn’t have mattered who had been wearing the Great Seal of office, others standing in the confined space of the balcony would have, if not killed, certainly been injured. And at the very least covered in blood and gore! I didn’t stand there too much, longer after that. But I did try to imagine what the new Number 2 had been thinking when he looked up to the sky to see the helicopter arriving at The Village with his successor aboard. After all he’d not been the new Number 2 for five minutes, and already he’d been replaced. Such is the price of fame and failure. I didn’t like that particular Number 2 all that much anyway. All too ready to please, all too free with giving his word, all too creepy-crawly! And the way he keeps taking off and putting on his spectacles during an interview with Number 6, makes him perhaps the most irritating citizen in The Village!
Then down onto the beach, I ran about shouting I am not a number, I am a free man, my voice carrying out over The Village. Patrick McGoohan twisted his ankle doing that. Frank Maher had warned him that it’s difficult running on soft sand, and so Frank had to film that part of the opening sequence in the end.
Then aboard the Stone Boat I imagined Number 6 in the main cabin with Number 9 as she gave him the Electro Pass. And that’s where Number 6 met his reliable men. They too were in the main cabin, just before they set off to attack the searchlight crew in the Bell Tower. Of course the Stone Boat was used for another purpose, as the gun runners boat in a re-enactment from ‘Many Happy Returns’ during a Prisoner Convention. It went very well I thought, certainly everyone watching appreciated the re-enactment. But then every re-enactment produced by David and Morag Stimpson were appreciated. They had guns, and a special smoke effect, fight scenes. Some thought that Number 6 would come climbing aboard the Stone Boat from out of the water, but no. Oh, well you can’t have everything. I congratulated David afterwards, who told me that because of the last minute appearance of Alexis Kanner at the Convention the programme of events was so full, that the gun-runners re-enactment had been squeezed out! However seeing as so much time and effort had been put into the re-enactment, I refused to let it be dropped. And so the gun runners re-enactment went head to head with something happening in the Hercules Hall. The thing was in those days was, that there were so many people attending ‘the Prisoner’ conventions, that there was audience enough for two events to take place simultaneously. Certainly after the announcement about he re-enactment to take place aboard the Stone Boat, people came running, running down the hill towards the hotel in order to watch it. 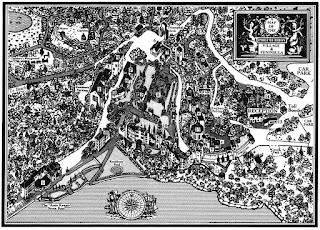 I recall one time standing outside the Ship Shop in Portmeirion, a woman was opening the shop, and a chap wearing overalls was busy swilling down the black and white chequered patio with a hosepipe. It was just like standing there watching a scene from ‘Arrival’ when the waitress was opening the café, and a chap in overalls swilling down the patio with a hosepipe. I’ve often wondered if the man in that scene worked for Portmeiron, and was in that scene doing what he does everyday but actually working for Portmeiron. After all there was a real café there called “Salutation Café”. But at least with this map of Portmeiron we know exactly where we are!