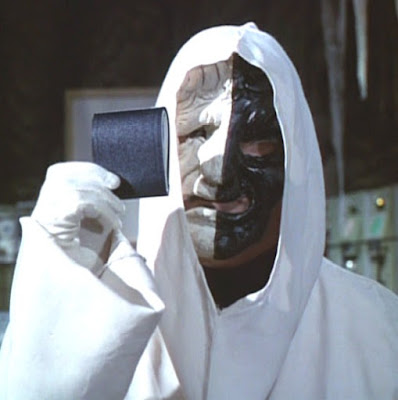 The prisoner known as Number 6 has been held captive in The Village for 15 months. But having vindicated the right of the individual to be individual, he is offered a very generous compensation package. His house is being made ready for him. Above and beyond this, the Prisoner is told he can desert them and go anywhere. The key to his house, travellers cheques one million, and a passport valid for anywhere, and a leather drawstring purse of petty cash. He is then free to go. But is this enough compensation for a man who has been incarcerated in The Village against his will? To have both his liberty and identity taken away from him, to have been reduced to nothing more than a mere number? Questioned, interviewed, his mind conditioned, his body treated with numerous drugs, and worse. No it isn’t! Only to be brought face to face with Number 1, the man, person, or thing to be responsible for his having been brought to The Village, and treatment thereafter! That being himself, Number 1, his own worst enemy, whom he vanquishes, then takes the compensation package and runs like blazes!