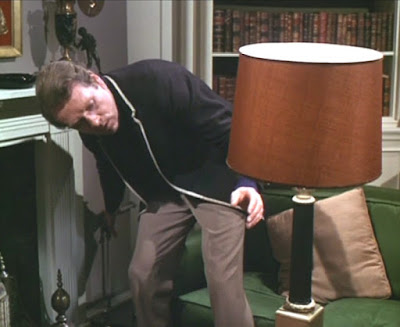 That's a funny way for anyone to commit suicide I must say! Surely life in The Village can't be as bad as all that! Alright, people have tried to get away, Number 6 has tried on numerous occasions. But suicide.... well there was Cobb, who was supposed to have killed himself by jumping out of a hospital window! Then Number 8, she tried to have herself killed by electrocution, although that was merely a ploy for Number 6’s benefit. The Rook-Number 58 said that one day he would die and beat them all. Number 73, she was another who attempted to commit suicide by slashing her wrists, then a second attempt saw her succeed by throwing herself out of a hospital window, a popular way to go apparently! Not forgetting Number 8 in ‘Living In Harmony,’ after he strangled Number 22 he committed suicide by throwing himself off the balcony in the Sliver Dollar Saloon.
But Number 6, I'd have thought better of him than this! What about those so called observers - they're supposed to see and hear everything. What were they on at this time, a tea break? Here's Number 6 earthed to a gas pipe, with his other hand grasping a short-circuiting table lamp - it's a funny way to kill yourself I must say. He could simply have laid down, making himself comfortable with his head on a pillow, and then turn on the gas fire. A quick, and painless death. No bother to anyone! Hang on a minute! Number 6 isn't committing suicide at all, he's trying to alter his left handedness. All those weeks of conditioning, reversed in a few seconds with one short sharp shock - is that likely? Well it has to be, as it worked!