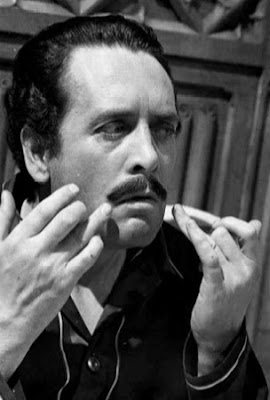 His body language is decidedly different to that of Number 6. He’s somewhat more arrogant. And while he impersonated Number 6, Curtis added little amendments. Because when Curtis enters the cottage of ‘6 Private’ he’s whistling. When did you ever hear Number 6 going about The Village whistling? I’ve never heard him doing so. It may be argued that with Curtis they created the perfect Number 6 for their purpose. He’s at home in The Village. He’s at ease with himself, what’s more he’s accepted his number, indicated by the wearing of his badge.
On the acting front, for the purpose of ‘The Schizoid Man’ Patrick McGoohan perhaps overplayed the role of Curtis as he impersonated Number 6, in the same way he had to underplay the real Number 6.
The Curtis-Number 6, is there to disorientate Number 6. He demonstrates that he’s better than Number 6. It’s almost as though Curtis is proud to be Number 6, “look at my badge, I’m Number Six, what’s more I’m better than you.” And so Curtis provokes Number 6.
On the face of it, having taken away Number 6’s identity, it looks as though they want to convince him that he isn’t Number 6. The idea is to break him. And that’s surprising really, because before they didn’t want any harm to befall Number 6. Former Number 2’s didn’t want a man of fragments, or were told not to damage the tissue, his brain tissue. Now we have the first Number 2 who is allowed to break Number 6! On the other hand, it could be interpreted that they didn’t want to convince him that he’s not Number 6, but that they wanted him to fight for his identity.