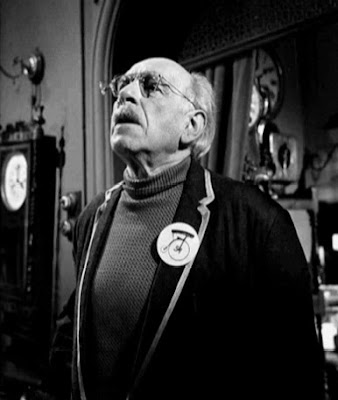 This is the Number 51, the watchmaker, who was recruited to The Village as a watchmaker! However it is quite on the cards that this man had once been involved with much more important things than simply repairing Number 6’s wristwatch which had stopped. As a watchmaker he may well have been involved with one of Number 2’s many achievements, the electrification of the clocks for instance.
Seeing as Number 6’s cottage contains an exact replica of the study of his London house, it’s always possible that the interior of Number 51’s watchmakers shop is an exact replica of his own shop elsewhere. Which was then closed the day he was brought to The Village, and the complete contents of his shop brought with him!