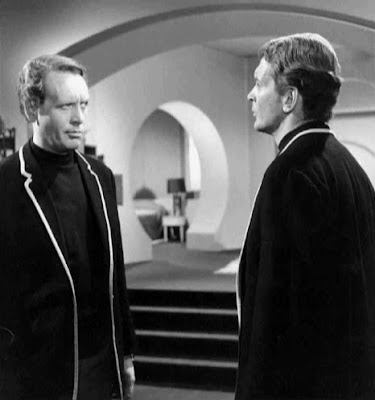 “Who have you come as?”
“I’m you.”
“You’re not me, I’m me.”
“Yes but I’m you as well, and at times you’re me.”
“I’m never you, and you’re not me.”
“I’m as often you as you are yourself!”
“I’m Number 6.”
“So am I, except when I’m Number Twelve. In fact thinking about it I should get twice the appearance money.”
“But I’m Number Twelve.”
“You can’t be Number Twelve because I’m Number Twelve who is supposed to be impersonating you.”
“But you said you’re Number Six.”
“Yes that’s right.”
“Look this isn’t going to work. If we don’t know who we are, how are we to expect the television viewers to know?”
“But we do know who we are, you know who you are, I know who we are.”
“Yes, but will the television viewer?”
“Does it matter?”
“Yes.”
“Well perhaps I could wear a number Six badge.”
“Don’t be daft, Number Six never wears his badge.”
“Well perhaps your impersonator doesn’t know that.”
“You could wear a different coloured blazer.”
“What colour?”
“Pink.”
“Pink! What do you take me for?”
“Well what about white with black piping?”
“That’s a good idea, like positive and negative.”
“What?”
“Or I could be your id to your ego!”
“Don’t get clever. You’re just my stunt double and don’t you forget it.”
“And don’t you forget I’m Number Six just as often as you are, but I take all the risks!”
“Oh alright. Drink?”
“They’re not open yet are they?”
“I’ve a bottle of Irish in my office.”
“It took you a long time to think of that one!”