You Miss it When It’s Not There! 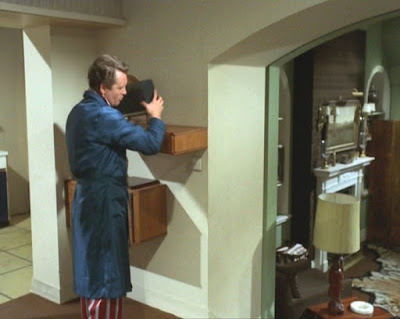 First he was annoyed because he couldn’t switch the loudspeaker off because it had no on/off switch. So he trampled it to pieces underfoot, but even that didn’t stop the incessant music.
“How do you stop this thing?”
“We can’t, it’s automatic.”
“Who controls it?”
Yes someone must control it! Because when the music stops playing, as the maid-Number 66 begins to cry, there is no more music. The maid leaves and then an electrician turns up with a replacement loudspeaker, which he then places on a small table and knocks twice on it, and the music begins. It cannot be that the knocks activate the loudspeaker, but it might be a signal for the microphones, so that whoever does control the music, knows to activate the loudspeaker. A loudspeaker with no aerial, and no mains lead for that matter. So it might well be possible that The Village has wi-fi technology!
Then during ‘The Chimes of Big Ben,’ Number 6 had found a more subtle way of rendering silence to his cottage, by placing the loudspeaker in the refrigerator.
But then one day Number 6 wakes up to find the water has been cut off, as well as the electricity. More than that, there isn’t even any piped music playing! He picks up the loudspeaker, he can’t switch it on, there being no on/off switch. So he shakes the loudspeaker, but to no avail, silence reigns! It just goes to show that no matter how irritating something is, you miss it when its not there!