A Question Of Speed! by our own reporter

Why is it that a night out results in something stupid being done, or a challenge thrown out and stupidly accepted? Number 6 and Number 2 enjoyed a night out in the Therapy Zone. The drink flowed freely, supplied by The Village brewer. 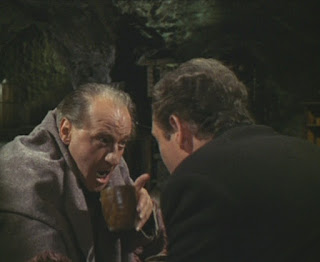 "Look" said Number 2 "My helicopter can out fly anything you'd care to put up against it." "But I haven't got an aeroplane or a helicopter" Number 6 told him. "No, but there's a boat!" Number 2 said. "What, a flying boat?" "Yes, it's moored at the end of the jetty. You could use that" Number 2 offered. "Why?" "To race me in my helicopter" Number 2 suggested.
"Well do you accept the challenge?" "I accept!" said Number 6. "Then the brewer is a witness, and two more large whiskys while you’re about it!"
The day of the race arrived, and all the good citizens of this our fine community were on hand to witness this unprecedented spectacle.
Both men are ready, although Number 2 does appear to have a slight advantage at this point! But the race soon gets underway, helicopter versus jet boat, air and water! 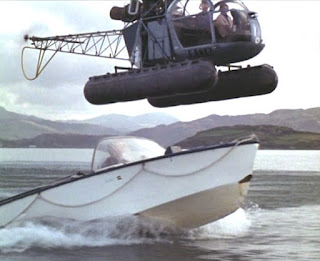 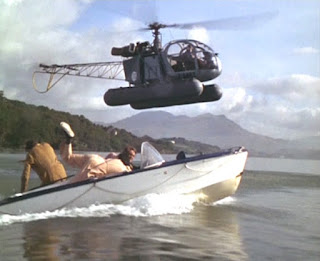 At this point it’s just about neck and neck. But there's trouble, as one mechanic tries to keep the engine running, while the second crewman tries desperately to plug a leak in the bottom of the boat! 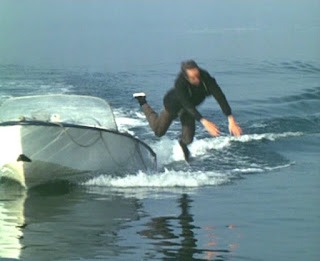 But in the end, the engine of Number 6's jet boat fails, and the two mechanics throw themselves overboard in fear of an explosion, as Number 6 himself abandons ship moments later, to find himself foundering in the water. 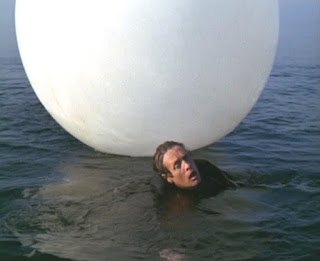 With the race won, Number 2 dropped a self-inflating lifebuoy into the water which automatically attached itself to Number 6.
The white self-inflating lifebuoy aiding Number 6's swim back to shore, is an invention developed by Village scientists, and as you can see works very well indeed. It is hoped that this life saving piece of equipment can be exported to maritime organisations, both military, and civilian, the world over.