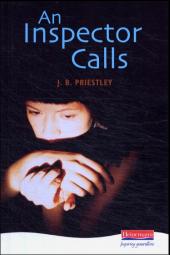 “One evening in the spring of 1912, the Birlings are celebrating their daughter Sheila’s engagement to Gerald Scott, who is also present. Husband and wife Arthur and Sybil Birling, along with their son Eric, are pleased with themselves. Birling toasts the happy couple, and Gerald presents Sheila with a ring which absolutely delights her.
Birling makes a lengthy speech, not only congratulating Gerald and Sheila, but also commenting on the state of the nation. He predicts prosperity, particularly referring to the example of the “unsinkable” Titanic, which set sail the week earlier. Birling styles himself as a “hard-headed man of business.”
The women leave the room, and Eric follows them. Birling and Gerald discuss the fact that Gerald might have “done better for [himself] socially”: Sheila is Gerald’s social inferior. Birling confides to Gerald that he is in the running for a knighthood in the next Honours List. When Eric returns, Birling continues giving advice, and he is passionately announcing his “every man for himself” worldview when the doorbell rings.
It is an Inspector, who refuses a drink from Birling. Birling is surprised, as an ex-Lord Mayor and an alderman, that he has never seen the Inspector before, though he knows the Brumley police force pretty well. The Inspector explains that he is here to investigate the death of a girl who died two hours ago in the Infirmary after committing suicide by drinking disinfectant. Her name was Eve Smith, and the Inspector brings with him a photograph, which he shows to Birling—but not to anyone else.
It is revealed that Eva Smith worked in Birling’s works, from which she was dismissed after being a ringleader in an unsuccessful strike to demand better pay for Birling’s workers. The Inspector outlines that “a chain of events” might be responsible for the girl’s death, and—for the rest of the play—interrogates each member of the family, asking questions about the part they played in Eva Smith’s life. We then discover that Sheila Birling encountered Eva Smith at Milwards, where Sheila jealously insisted that she was dismissed. Sheila feels tremendously guilty about her part in Eva’s death. It becomes clear that each member of the family might have part of the responsibility.
Eva Smith then, we discover, changed her name to Daisy Renton —and it is by this name that she encountered Gerald Croft, with whom she had a protracted love affair. Sheila is not as upset as one might expect; indeed, she seems to have already guessed why Gerald was absent from their relationship last summer. He put her up in a cottage he was looking after, made love to her, and gave her gifts of money, but after a while, he ended the relationship. Gerald asks the Inspector, whose control over proceedings is now clear, to leave—and Sheila gives him back his engagement ring.
The Inspector next interrogates Mrs. Birling, who remains icily resistant to accepting any responsibility. Eva Smith came to her, pregnant, to ask for help from a charity committee of which Mrs. Birling was chairperson. Mrs. Birling used her influence to have the committee refuse to help the girl. Mrs. Birling resists the Inspector’s questioning, eventually forcefully telling him that the father of the child is the one with whom the true responsibility rests.
It transpires, to Mrs. Birling’s horror, that Eric was, in fact, the father of the child, and she has just unwittingly damned her own son. Once Eric returns, the Inspector interrogates him about his relationship with Eva Smith. After meeting her in a bar when he was drunk (he has a drinking problem), he forced his way into her rooms, then later returned and continued their sexual relationship. He also gave her money that he had stolen from his father’s works, but after a while, Eva broke off the relationship, telling Eric that he did not love her.
The Inspector makes a final speech, telling the Birlings, “We don’t live alone. We are members of one body. We are responsible for each other. And I tell you that the time will soon come when, if men will not learn that lesson, then they will be taught it in fire and blood and anguish.” He exits.
After his exit, the Birlings initially fight among themselves. Sheila finally suggests that the Inspector might not have been a real police inspector. Gerald returns, having found out as much from talking to a policeman on the corner of the street. The Birlings begin to suspect that they have been hoaxed. Significantly, Eric and Sheila, unlike their parents and Gerald, still see themselves as responsible. “He was our police inspector all right,” Eric and Sheila conclude, whether or not he had the state’s authority or was even real.
Realizing that they could each have been shown a different photograph, and after calling the Chief Constable to confirm their suspicions, Mr. and Mrs. Birling and Gerald conclude that they have been hoaxed, and they are incredibly relieved. Gerald suggests that there were probably several different girls in each of their stories. They call the Infirmary and learn delightedly that no girl has died that night—the Infirmary has seen no suicide for months. Everyone, it seems, is off the hook, even if each of their actions was immoral and irresponsible. Only Sheila and Eric fail to agree with that sentiment and recognize the overall theme of responsibility. As Birling mocks his children’s feelings of moral guilt, the phone rings.
He answers it and is shocked, revealing the play’s final twist: “That was the police. A girl has just died—on her way to the Infirmary—after swallowing some disinfectant. And a police inspector is on his way here—to ask some—questions”

My apologies for such a length summary, but you had to be given the complete picture. So, what’s ‘An Inspector Calls’ to do with ‘the Prisoner?’ Well on the face of it not a great deal, if anything at all. However in one respect they are very much alike, they are both vicious circles! An Inspector calls on the Birlings in regard to an investigation of the death of a young woman. He carries out that investigation by questioning each person at the dinner party. And when that investigation is concluded he………… takes his leave. But it does not stop there, because then the family fall out amongst themselves, then the idea strikes that they have been victims of some elaborate hoax. After contacting both the Chief Constable and the Infirmary, it is revealed that there is no such Inspector, and no young woman has died that night. The trouble is you see it hasn’t happened yet. The young woman has yet to commit suicide, and the Inspector has yet to call.
With ‘the Prisoner,’ a young man resigns from his job. He’s about to go away on holiday. But they come for him before he has the chance to escape. Two Undertakers abduct him from his home, eventually to wake up in The Village. The man’s identity is taken away from him, not that he ever had an identity as we don’t even know his name, and he’s given the number 6. He is then put through a number of ordeals which he must survive, and the longer it goes on, the more extreme the ordeals become. Until the moment comes when Number 6 is taken into the underworld, a cavern actually, in order that he meets Number 1. But it’s not as simple as that, there is the final ordeal by trial which Number 6 has to oversee. And rather than make a judgement, he has the two protagonists put in a place of security until Number 6’s inauguration.
The meeting with Number 1 does not go well, for Number 6 is brought face to face with himself, with the sudden realisation that it is he who is responsible for his current predicament. Eventually, as within the Birling’s household, there is a “falling out” and Number 6 manages to escape in the confusion, eventually to return to his home in the City of Westminster. As his Butler stands looking on, the man gets behind the wheel of his Lotus Seven, and drives off. He drives through London on the way to an underground car park. From there to make his way on foot to an office, where he hands in his letter of resignation to a bureaucrat sat behind an oak desk. Suddenly there are clouds, thunder, and a long deserted runway. From out of the distance comes a green, yellow nosed Lotus Seven. The final shot is of a man with the look of determination on his face. You think all that with ‘the Prisoner’ is all over and done with. Its not, because in the same way as with ‘An Inspector Calls,’ ‘the Prisoner’ is really only just about to begin!