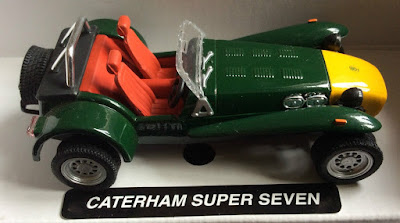 On Friday while out and about doing some shopping, Morag and I visited a number of charity shops. In one I found the above diecast model of a Caterham Super Seven on a shelf. It loomed large at me because of its Prisoner livery. However it wasn’t ‘the Prisoner’ which I automatically called to mind, it was my film ‘Village Day.’ Because this is the type pf Caterham Super seven which features in the film.
Also there was a diecast model of an Alfa Romeo, but it was the wrong colour, so that remained on the shelf, while I happily purchased the Caterham Super Seven, which happens to be the first acquisition for my collection in quite some time.