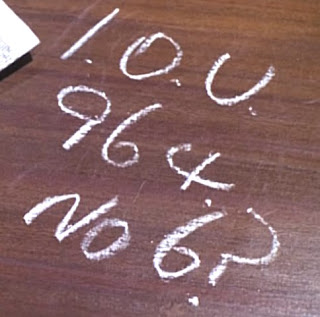 Why did Number 6 bother to put his number to that I.O.U he wrote on the counter in the General Stores, in fact why did he bother to write it in the first place? After all he didn’t expect to be paying that debt, as he was about to escape The Village and wouldn’t be coming back. Unless of course he wanted to leave a message, in order to let them know that it had been Number 6 who had taken the provisions, the copy of The Tally Ho, the loudspeaker, and the 35mm Cannon Dial camera.
But The Village was deserted. Who did Number 6 think would read his I. O. U? But at least he did sign it, even though he was questioning his identity even at that moment!